HomeNewsTunisia: customs is biggest problem for 49% of exporters
News 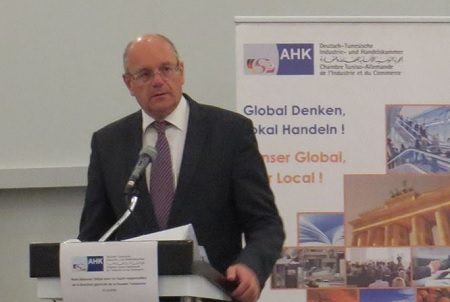 The AHK Tunisia recently organized a breakfast-debate in Tunis, for the member companies of the AHK Tunisia, with high officials of the Tunisian customs.

The meeting aimed to offer the opportunity to member companies, operating in the national and international economy and very often dealing with the administration and especially the customs services, to ask questions related to their markets and border transfer operations.

Opening the debate, Ibrahim Debache, President of AHK Tunisia, said: “We conducted a survey at AHK Tunisia with German companies based in Tunisia.

According to this survey, customs is largely the most administratively burdensome, for 81% of non-fully exporting companies and 49% of exporters…

We believe that it would be better to strengthen the communication between your services and these companies; with the dialogue, we can answer the questions and therefore reduce the obstacles”.

Customs representatives expressed in this context the willingness of their administration to overcome these shortcomings and to support businesses.

Several questions were subsequently posed by the members present. The business leaders present generally complained of the lengthy delays for deliveries and the cumbersome administrative customs procedure.

The General Product Nomenclature (GPM), which is used for the designation and coding of goods, is a source of major concern for many companies and causes procedural delays at customs, according to several stakeholders. The updating of the GPM has therefore become a necessity.

For their part, customs officials said that the customs portal in its new version, which will be available soon, includes answers to several questions.

In addition, and with a view to better serving economic operators, Customs has set up an “SOS Export” listening unit, which operates on a continuous basis and responds, on a case-by-case basis, to questions from individuals and businesses having direct contact with the Tunisian Customs.

Tunisia-Elections: ”All is for the best in the best,” according to...

Deutsche Bank jumps up on ME bond sales