Tunisia: EIB, BTK to provide SMEs up to 92 million dinars 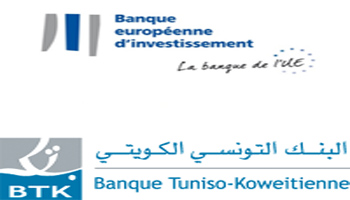 The European Investment Bank (EIB), the Tunisian-Kuwaiti Bank (BTK) and the “Tunis Entrepreneurship Network” have signed a framework agreement on partnership and financing of Tunisian small and medium enterprises (SMEs) and very small enterprises (VSEs), worth 40 million Euros, the equivalent of 92 million Tunisian dinars (MTD).

Houssein Mouelhi, CEO of BTK said the EIB will make available to BTK a credit line in the amount of 20 million Euros (1 euro = 2,2dt) adding that the BTK will also provide, in turn, an additional 20 million Euros for Tunisian SMEs. He added that 10% of this amount will be spent on VSEs in creation or expansion phases.

The latter will benefit from a preferential interest rate. Expressing hope that the final agreement of that line will be signed before the end of the year, he stressed the importance of financing SMEs and VSEs in Tunisia, which represent the backbone of the economy (90% of the economic fabric), although they have only 15% of bank financing.

has more than 130 members across the country, and aims to provide support for young entrepreneurs in order to ensure the success of their projects and the sustainability their business.

Philippe de Fontaine Vive, Vice-President of the EIB, said the agreement is the first of its kind to be launched by the EIB in the Mediterranean region, adding that businesses that want to benefit from these funds must meet two main criteria: fiscal transparency and compliance with environmental requirements. “In addition to funding, this kind of cooperation and partnership will ensure the transfer of the know-how and skills of EIB to Tunisian entrepreneurs, which is very important,” he further noted.

President: “The Somali National Army is making rapid progress, and the...