HomeInterviewTunisia: Is there a new life for the airport of Tabarka?
Interview

Tunisia: Is there a new life for the airport of Tabarka? 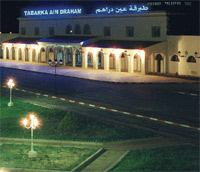 His visit to Jendouba and the airport of Tabarka, and challenges of regional development are some of the themes of an Interview given by Minister of Regional Development and Planning, Jameledine Gharbi to Africanmanager, on the sidelines of a visit paid to Jendouba on Friday, July 20, 2012.

Which conclusions can you draw from your visit to Jendouba?

It is very positive. We contacted the investors who have expressed interest to invest and develop their activities in Tunisia, which provides great potential to Tunisia. They include real companies offering employment and enhancing the national heritage. About 20 projects in various sectors, namely spa, tourism, health, automotive and pharmaceutical industries were inaugurated. However, there is a strategic effort to make development in the region. A development at the level of infrastructure should be made. The road between Tabarka and Jendouba needs urgent action to remove obstacles to tourism. However, if we want these areas to be developed, we must fundamentally improve road infrastructure. The rail line linking Tunis to Tabarka is totally marginalized. Why not developing this line?

Moreover, the airport of Tabarka operates in a very low manner. It is in deficit. This airport needs to develop its activities and its international routes since the development potential in this area already exists.

What exactly bothers you about officials of this airport?

The airport officials believe that their intervention is limited to inside the airport. They have already respected the standards and networks of airport maintenance. The airport is extraordinary in terms of maintenance. But the problem is that its managers believe that their functions cannot exceed this boundary, that is to say towards the promotion of the airport and defending it against traffic competition between different other airports, namely Monastir, Tozeur, Carthage and Enfidha.

Currently there are is no clear strategy at the level of promotion of investment in this region.

There is no return on investment or capitalization, though it is an infrastructure that should have a strong impact as a lever for development in the region.

Maybe it’s not a criticism but rather an invitation. Officials must defend the airport and flights. There are many emigrants from the region and who want to return through that airport. A cooperation with different actors in the region should also exist. Since hotels in the region are not dynamic and there is not really an interesting tourist activity, the airport does not work. Hence there is a need to unite all the efforts of industry, tourism and culture in order to propose an overall development strategy. It is also very important to conduct a thorough review of land use in Tabarka.

Can we talk in this case about the government’s responsibility?

Yes, this is a shared responsibility. We need to develop together a common strategy, which is really lacking in the region and hence there is no future visibility. Various officials and players in the region cannot even look to the future of the region of Tabarka in 2025. This is why the city is structured in a completely anarchic way. There is not a blueprint or a long term plan. We currently have 300,000 Algerian tourists that come to Tunisia through Melloula. But no interest has been given to this region. Worse! The road between Melloula and Tabarka is called “the road of death” and that because of poor infrastructure.

The state is called, in this regard, to plan, as soon as possible, in the 2012 or 2013 Budget the construction of this road connecting Melloula to Tabarka. But there should also be a responsibility, an autonomy for the region when it comes to its own development.

We can inject a lot of funds in the region of Tabarka. But if there are not in the region people who think and react autonomously, this would completely kill development. The role of government is to prepare the infrastructure and develop all that pertains to business environment and encourage investment. Several projects have been created in the region of Jendouba. However, they worked only during limited periods.

Why the choice of Jendouba?

We started by Jendouba because that is the proposal of the local citizens. The latter came last week and proposed that we visit their projects. It is for that reason that we organized this visit. Employment is investment.

Turkey released last week 500 million dinars for Tunisia. What are the areas of intervention?

Three areas were identified, the first is that of infrastructure and projects structuring of the economy that have a large capital on society and the national economy such as the project of towns’ protection against flood, construction of dams and incorporated cities.

The second focus is to support small and medium enterprises. For the third sector, it is an intervention for the construction of housing units and to provide funds to needy families to help them have sources of income.

What are the challenges for regional development?

The first challenge concerns the responsibility of regions to support their own development. If we want to achieve democracy, it is through decentralization based on a participatory approach. Indeed, each region must identify its areas. The second challenge is how each region develops independently of the state resources. Each region should have its own fund which shall be constituted by itself. The region needs to focus its priorities through its own budget.

Each region should also have its own development strategy regardless of the potential and resources it possesses.

How do you judge the supplementary budget law allocated to regional development?

The 2012 budget has responded at 35% to all projects proposed by the regions. The regions of Sidi Bouzid and El kef have the lion’s share, or about 43% of this budget. For the remaining requests, we are looking for other funding sources with different national and international agencies and donors. We constantly receive requests for funding from outside. The latest request for funding came from Germany.

Nigerian’s economy grew by 6.4% in first quarter, inflation down