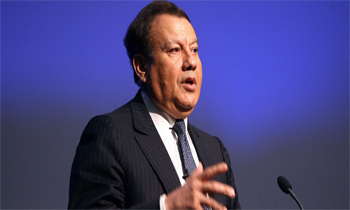 The bitterness is full and frustration too. Jalloul Ayed, former finance minister and Tunisia’s candidate for the Presidency of the African Development Bank (AfDB) is no longer in the race. “It is finished,” he posted on his official Facebook page, backed in this by a tweet in the same direction by Minister of Development and International Cooperation, Yassine Brahim.

The disappointment is all the more great and acute as the unsuccessful candidate, contacted by Express FM, revealed that Libya and Algeria did not vote for him.

Thus, the adventure ends here for him and for four other candidates who are, in order of precedence, Samura Kamara from Sierra Leone, Sufian Ahmed from Ethiopia, Malian Boubacar Sidibé Birama from Mali and Thomas Sakala from Zimbabwe.

There are only 3 candidates left: Nigeria’s Akinwumi Adesina, Chad’s Kordjé Bédoumra and the only lady, Christina Duarte from Cape Verde.

Eight candidates were vying to succeed Rwandan Donald Kaberuka, who quits after two terms of five years at the head of this banking institution in the service of development in Africa.

The name of the next president of the AfDB will be known on Friday after the Board of Governors finish questioning the remaining candidates on their vision of the bank’s governance and economic development of the continent.

On this ground, according to a consultant of the Pan African institution, “they will certainly remain faithful to the line drawn by Kaberuka, that is to say the continued structural transformation of Africa, infrastructure financing and support to the private sector.”

Obviously Jalloul Ayed was “betrayed” by the Maghreb countries who had promised him one way or another their support, especially as, together, they hold more than 16% of votes.

Moreover, the Tunisian candidate has benefited from the sponsorship of Libya and Morocco.

In this respect, one can only speculate on the position of Algeria, which weighs heavily in the vote with 4.21% of votes, the voting is proportional to the shares held in the capital of the bank, similar to Nigeria, Egypt, and South Africa that have over 9%, 5% and 4.8% of votes, respectively.

But the most insistent in this elimination is that the Tunisian government has not, so to speak, pulled out all the stops to support Jalloul Ayed on his way to the presidency of the ADB.

Whether the government of Mehdi Jomaa or the one that succeeded it, we did not spot any vigorous and smoothly conducted actions that would have allowed the Tunisian candidate to make his way through in the succession of Donald Kaberuka, except some scattered initiatives that are not intended, in the present case, to achieve much, while “big names” are competing and receive unfailing support of countries of ‘Sub-Saharan Africa.

Expert in international relations Abdelmajid Abdelli was quoted by TAP as saying that the profile remains of secondary importance compared to political considerations that feature in the elections.

Among those considerations he mentioned the geographical and regional affiliation of the candidate’s country, its weight in the chessboard of the region, the dynamism of its diplomacy and its electoral weight.

The candidate’s belonging to English or French speaking Africa is also taken into account.

In such a configuration, the Tunisian government needed to mobilize more consistently Maghreb neighbors and develop a real strategy to win the presidency of the African economic institution.

Instead and to increase the chances of its candidate for this position, the Tunisian government has withdrawn the candidacy of Nidhal Ouerfelli, former minister for economic affairs, for a position within the Arab Bank for Economic Development in Africa (BADEA), according to what was stated by Minister of Foreign Affairs, Taieb Baccouche, who added with much conviction that “the Tunisian candidate has a real chance.”

The pre-verdict of the Board of Governors of the AfDB had none of it. Indeed, a solid candidacy for a similar position is not done in almost improvisation and especially lack of enthusiasm on the part of the candidate’s government.

Tunisia: return of the FATF, or the file that could end...