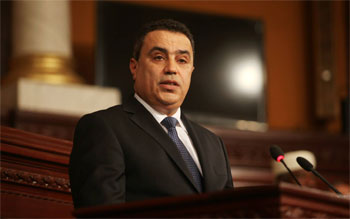 Ahead of his Friday meeting with President Barack Obama, Tunisia’s interim prime minister says the government at last has a handle on extremism and the transition to democracy is back on track. Now, he says, it’s time to fix the faltering economy.

In Washington, Mehdi Jomaa will be talking about security in North Africa but also how the United States can support the troubled finances of Tunisia — which kicked off the region-wide pro-democracy uprisings in 2011.

“The security situation in Tunisia is today much more under control,” Jomaa told The Associated Press in an interview. “Tunisia has learned how to confront (the extremists) over the past three years and we have a security force that has organized itself and is well prepared to prevent new attacks.”

Jomaa, an engineer by training, was appointed in December to form a cabinet of technocrats to guide the country to new elections.

Tunisia has a new constitution called the most progressive in the Arab world, written by Islamist, left-wing and liberal parties. The country is now looking forward to new elections by the end of the year, after a transition that has been marked by terrorist attacks, political assassinations and widespread social unrest.

The initial promise of the 2011 pro-democracy revolutions in the Middle East has faded in many countries, with a military coup in Egypt, a civil war in Syria and militia-fueled chaos in Libya.

Tunisia alone seems to be managing a transition characterized by consensus between political factions, but it hasn’t been easy. The rise of radical Islamists linked with al-Qaida — and armed with weapons spilling over the porous borders with Libya — has challenged the state.

Last year, extremists gunned down two prominent opposition politicians in front of their families, plunging the country into crisis and stalling efforts to write the new constitution. Meanwhile soldiers clashed with armed militants holed up in mountain hideouts on the Algerian border, resulting in dozens of deaths.

Jomaa said that following initial setbacks, Tunisia’s forces have now mastered the threat. In a pair of operations in February, seven members of the radical Ansar al-Shariah group were killed and six arrested.

“The authors of these assassinations have been arrested and when that wasn’t possible, eliminated,” he said, adding that only two or three top leaders remain at large outside the country, including the group’s leader, Seifallah Ben Hassine, who is believed to be in Libya.

Jomaa could not confirm or deny reports in December that Ben Hassine had been arrested in Libya.

The prime minister said talks with the U.S. would include requests for advanced equipment to fight terrorism.

“When we have such needs, we speak with all our friends, particularly the Americans, who have a high level of technological expertise,” he said.

Just as important, however, will be American help in confronting the country’s shaky finances and plugging an estimated $2-3 billion hole in the 2014 budget, mostly likely through external borrowing.

Jomaa will also be courting U.S. investors on his trip, which starts with a stop in New York.

“The coming months will be very difficult for the finances of the state, but aside from that, Tunisia remains attractive to private investment and in the coming months, you will see many investors coming to Tunisia,” said Jomaa, who has recently visited a number of wealthy countries in the Gulf and included many businessmen in his delegation to the U.S.

Growth in 2013 was 2.4 percent, which is low for the region and isn’t expected to improve a great deal in 2014. Unemployment remains high at 15 percent. Tunisia, however, has a good debt-to-GDP ratio of around 48 percent, allowing it to continue borrowing.

The World Bank, International Monetary Fund and other international institutions welcomed the completion of Tunisia’s new constitution by releasing hundreds of millions of dollars in loans, but with these come unpopular conditions such as cutting subsidies.

Inflation hit highs of 6 percent in Tunisia in 2013, provoking angry demonstrations over the cost of living — demonstrations that could get worse if subsidies are cut.

Jomaa said the government would find a way to reform the subsidies without hurting the purchasing power of low-income groups, by consulting with political parties and non-governmental groups, and predicted the country’s fortunes would change as new investment pours in.

“The consensus which made us overcome the difficulties and adopt a very modern and progressive constitution will also guide us through this difficult period and lead us to calmer waters,” he predicted.