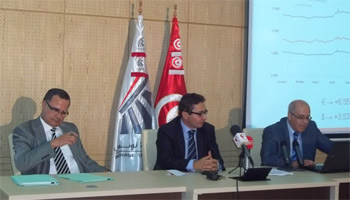 Activities of the stock exchange in the first eight months of 2012 were the subject of a press conference held Thursday, September 20, 2012, at the seat of the Tunis Stock Exchange.

A large number of analysts, brokers and journalists were present. All indicators of the stock market rose significantly compared to the year 2011. The results of listed companies in the first half of 2012 rose by 35% and the vast majority of them have even continued the payment of dividends. In addition, several distributions of bonus shares were also carried out in connection with capital increases, said a report of the Stock Exchange for the first eight months of the previous year.

However, officials of the Exchange did not hide that it is facing difficulties as a result of political and social tensions underwent by the country today. In a statement to Africanmanager Raouf Boudabbous, Communications Officer at the Stock Exchange noted that during the last two weeks, the Tunis stock market has been affected by the recent events.

Indeed, during that period, the Tunindex fell 5%. The daily trading volume also decreased, according to Boudabbous.

Nevertheless, he considered that this situation is temporary despite its impact on foreign investors. He called not to worry or be alarmed. Indeed, no fewer than five companies will be listed. “This will revitalize and strengthen trading at the stock market,” he said. Moreover, the alternative market has already been enriched with two new businesses (Hexabyte and AMS of the Sahel).

The latter have been able to raise through the market 2 MTD and 10 MTD, respectively. They also recorded respective response rates of 40 and 20 times the offer made on the market.

Boudabbous called therefore to cope with difficulties through good communication, so as not to lose the confidence of investors and prevent these events to recur again. “We need to take things seriously so that the community market can resume,” he added.

Fadhel Abdelkefi, Chairman of the Board of Directors of the Tunis Stock Exchange, pointed to the decline reported in the stock market since the end of August to September 20, stating that “this is a very significant drop.” However, he said that the stock exchange has not yet shown its full potential. We will have the opportunity to show it soon as there will be new IPOs, “promised Abdelkefi, adding that” these are things that happen often, but we hope that these things will not be repeated to avoid a mini crisis.”

The benchmark index of the stock market grew by 10.4% in the first 8 months of the year, after losing 7.63% in 2011. The sector of financial corporations, the most representative in the Tunindex, was the largest contributor to the latter’s increase to 3.89%.

Four to five new companies operating in various sectors will enter the stock market soon. These IPOs will allow market capitalization to break through the threshold of 25% of GDP.

Training Workshop on Trade in Services Negotiations for AU-CFTA Negotiators