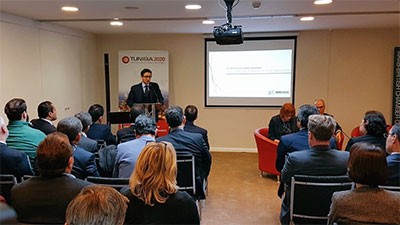 It was an opportunity for Mr. Fadhel Abdelkefi, Minister of Investment, development and International Cooperation to present the new business environment offered to British companies in Tunisia and the new investment law recently passed by the House of people’s representatives.

Abdelkefi also presented the agenda of the next conference and the projects in this framework, inviting traders to participate as part of a win-win cooperation.

The Minister was welcomed by Baroness Symons of Vernham Dean, Chairman of the Chamber and senior officials of British companies interested in the business climate in Tunisia.

On the sidelines of his participation, Abdelkefi met with a number of representatives of the Arab and British business press and media.

The meetings provided an opportunity to review the economic situation in the country and the difficulties it faces, the reforms undertaken and those ongoing as well as investment opportunities and existing partnership, particularly in the 2016-2020 development plan.

Tunisia: the outcome of the crisis could lie in taxation!!!