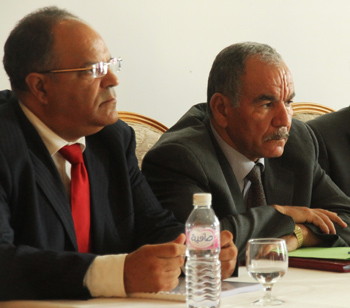 The debates in the National Constituent Assembly (NCA) on the Terrorism Act have been criticized by the public opinion, the political class and civil society. Observers noted a dual attitude on the part of the majority of members who took the floor: first negotiations are dragging on to make viewers who are following the discussions lose any reference helping them to get a clear idea about the subject and have the necessary perspective that helps them get their own idea; and secondly trivialize the provisions of the bill.

Indeed, a proposal was recently made to “downgrade” the bill that was originally an organic law to make it an ordinary law. Fortunately, this proposal was rejected, but after heated discussions and a very close vote.

For its part, the independent coordination body of transitional justice presented a draft amendment of some articles of the draft law on the fight against terrorism and money laundering as presented by the Committee on Rights, Freedoms and External Relations at the NCA. The aim of these proposals is to ensure a balance between an effective fight against the terrorist crime on the one hand and protecting the rights of all stakeholders including judges, witnesses, security, military and victims on the other hand.

Those experts in security, law, economics and finance noted during their interventions 8 gaps and shortcomings of the bill that is currently being discussed by the NCA.

They called in the first place to define in a clear and precise way the legal terms and concepts that are the basis of the bill like “national territory,” “continental shelf”, or also “chemical crimes.”

They found that the part that deals with terrorist crimes was preceded in the classification by the sanctions imposed on them. The transitional justice body said the sanctions should logically follow crimes.

It was also found that Articles 38 and 39 takes from the public prosecutor at the Court of First Instance in Tunis 1 the exclusive authority to keep the suspect in custody, which authority is now exclusively given to public prosecutors in all courts of the country.

The period and requirements of prescription, the legal framework of the collective office of investigating judges, custody and powers of investigating judges and those of public prosecutors in investigations on the subject are issues that require clarification in the bill submitted to the NCA, according to experts at the independent coordination body of transitional justice.

On another level, the independent coordination body of transitional justice suggests introducing an amendment to the proposal made under the bill on the creation of a committee dedicated to the fight against terrorism, composed of government parties representing ministries and independent national experts, and even civil society activists.

The experts propose that the committee becomes a body with a legal personality and financial independence. It must have at its disposal a set of structures, institutions and skills that enable it to operate with autonomy and efficiency