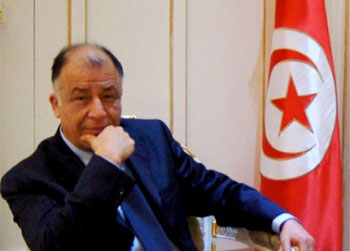 Minister of Education, Neji Jalloul appears as the rising star of the government. According to the political barometer for the month of September 2015 by Emrhod Consulting developed in collaboration with Assabahnews, he is credited with a satisfaction rate of 17% of respondents, followed by Interior Minister, Nejem Gharsalli (8.1%), then Minister of Health, Said Aidi (7.1%), Defence Minister, Farhat Horchani (5.5%) and Foreign Minister, Taieb Baccouche with 2.6%.

Choosing Neji Jalloul is “logical”, authors of the poll commented, not because of his confrontations with unions, but for his “courageous decisions and the impact of the work done in the Ministry of Education during the last month and which his predecessors were unable to do for years. “

The poll conducted between September 9 and 12 on a sample of 1,024 people from 24 governorates, reports a “gradual ascension” of Beji Caid Essebsi’s approval ratings compared to the beginning of his term, in that 53.4% of respondents are satisfied with his performance against 52.1% in July and 51.4% in April.

This progress is “expected” by the pollster who refers to the “role played by the Presidency of the Republic throughout the last weeks and the significant presence of BCE, especially as regards the agreement on many issues through consensus among different stakeholders.”

This is to some extent true for Prime Minister, Habib Essid, credited with a satisfaction rate of 52.2% of respondents against 46.1% in May. This progress is explained by the way some crises and terrorist operations were gradually overcome as well as the relative stability prevailing in the country and the improvement of some indicators due to the field visits of the Prime Minister and to all decisions and actions taken.

The approval ratings of parliament Speaker Mohamed Ennaceur have also improved to stand at 37.6% against 31.5% in May, having gained experience in the management of parliamentary sessions and for the results obtained in the approximation of views on number of issues discussed in parliament.

The law on reconciliation, unknown!

65, 8% of Tunisians interviewed say they have no idea about the bill on economic reconciliation. They were taken to the tune of 85.2% among the illiterate, 75% among those with a level of primary education, 66% with secondary level and 40.8% with a university level.

48.6% of respondents said they were against the bill and 33.3% for, while the rest are undecided.

Another result of the poll: 70.1% of Tunisians are optimistic about the future, they were 68.9% in July, while 26.1% of respondents declared themselves pessimistic because of the difficult situation in the country and the upheavals it faces from time to time.

Regarding the economic situation, it is considered “stagnant” by 51.2% of respondents, while 35.9% of them think it is improving.

Finally, concerning the terrorist threat, 59.4% of Tunisians consider that it has not been eliminated against 67.5% in July.

The aviation industry in Tunisia, more and more a reality!