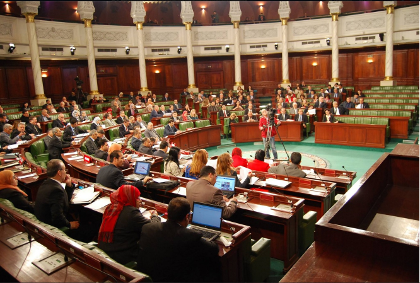 NGO Al-Bawsla published Wednesday, December 2, its annual report on the activity of MPs and the rate of their attendance in the House of People’s Representatives (HPR) during the first parliamentary session.

Only 16 among 217 members were assiduous in plenary sessions whose number is estimated at 54, noted that document, adding that several MPs also came late.

Figures are provided in support: 324 hours and 34 minutes of delay were recorded in 346 committee meetings against 92 hours and 5 minutes for 54 plenary sessions. What are the real causes of absenteeism in the assembly? Does this idleness affect parliamentary work? What is its economic cost? Three questions which African Manager asked to observers of the parliament arena.

What are the causes?

For the president of Dostourna network, Jawher Ben Mbarek, two main causes explain the idleness of all MPs. There is a lack of firmness on the part of the Presidency of the House of People’s Representatives in the application of rules of procedure and the weakness of sanctions for the worst off among them.

“The majority of members have not been up to the responsibility and the parliamentary term entrusted to them by the people,” Ben Mbarek said in a statement to African Manager, stating that this behavior will certainly have an impact on the legislative tasks and policies of the HPR.

As justification, Jawher said the HPR has since its election adopted only two major draft laws, namely the law on the fight against terrorism and money laundering and the law on the Constitutional Court all the more that it could not question the government. However, this is illogical for a country that is still in a delicate transitional phase, according to him.

This view is shared by Kais Saied, constitutional law professor who pointed out that this indiscipline would not have a direct effect on the legislative work of the HPR, but rather affect the image of this institution with citizens.

Questionable use of public money…

Beyond this legislative issue, it seems that the absence of HPR members also interests the economics expert community. Several of them already feel that this behavior can only be costly for the Tunisian economy.

Former Finance Minister Houcine Dimassi, in this context, took this opportunity to criticize the absence of a large number of MPs while calling their performance poor.

“We have noticed a small contribution of several MPs to the work of various committees and even plenary meetings of the HPR. That is why it is important to denounce a certain contradiction between their performance and the 44% increase in the budget of the HPR for 2016,” noted Dimassi, emphasizing the difficult economic situation faced by the country also marked by the evaporation of the growth rate that could not exceed 0.5% by the end of this year.

It should be recalled that the draft budget of the House of People’s Representatives (HPR) for 2016 was recently adopted with funds totalling 32.900 million dinars. The management costs are estimated at 30.812 million dinars, while development expenditure amounted to 2.88 million dinars.

What to do? Houcine Dimassi called for law enforcement through deduction from wages for repeated and unjustified absence of MPs as already announced by the Bureau of the House of People’s Representatives (ARP) …

The latter, it should be recalled, promised daily posting on the portal of the Parliament of the list of deputies who do not attend plenary sessions and committee work. The latter will be sent once a week to the presidents of parliamentary groups to take the necessary measures, it has said.

Difficult to quantify the cost

Regarding the economic cost, Mourad Hattab, an expert in financial risk, deemed difficult to quantify the direct cost of absence of members of HPR, given the normal running of the plenary sessions and the work of all committees.

He also noted that “if we want to quantify it in relation to the allowances, the cost is not significant as 324 hours of delay in committee works or 92 hours for plenary sessions are not important.”

According to Hattab, this phenomenon should not be ignored; otherwise it will affect the proper functioning of the work of the HPR. “It is much more an internal management issue than a financial problem and things should not take an exponential dimension as to be within a threshold of 5% of the overall volume of pay.

Now, we are in a 0% threshold of the allowance”, the expert told African Manager before guarding against “the risk of producing a negative image of the situation with the public about what is happening at the HPR.”