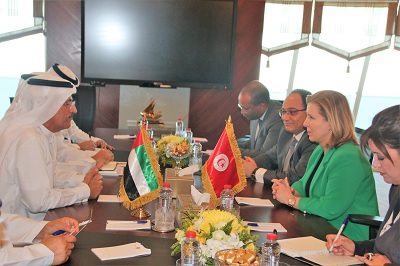 Minister of Tourism and Handicrafts, Selma Elloumi, met with the Minister of Economy of the United Arab Emirates, Sultan Bin Saeed Al-Mansoori, who noted that the relations between the two countries are developing considerably in the fields of economic activities.

He also stressed the important role played by the private sector in strengthening trade and investment ties between the two countries.

Non-oil trade between the UAE and Tunisia grew to more than $ 1.5 billion in 2016 with a 7% increase over 2015, underscoring the growing bilateral economic ties, said Al-Mansoori.

Quoted by the UAE news agency, he added that “the two countries are developing a strong economic potential with a strategic geographical positioning that opens the way to increased economic cooperation, including in the sectors of tourism, trade and tourism and air transport,” he said.

He called for a joint business forum to explore investment opportunities and foster direct links between investors and entrepreneurs on both sides, highlighting the role of the UAE, the UAEIIC, in this regard.

She also highlighted the major economic developments in Tunisia recently, noting that the authorities are currently focusing on improving the education and industrial sectors. She expressed support for the convening of a joint Tunisia-UAE Tunisia forum to serve as a catalyst for strengthening bilateral trade and investment ties.

Tunisia: only 13% of payments are made by bank cards

Kenya to Host the First Monitoring for Environment and Security in...