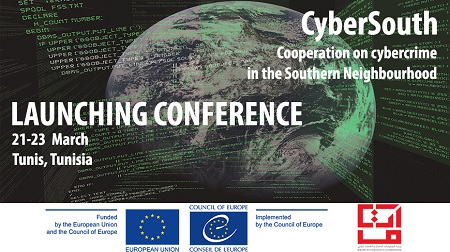 The launch of Cybersouth, a cooperation project to fight cyber crime in the region of the Southern Neighborhood, was officially announced Wednesday in Tunis.

The announcement was made at a launching conference organized on March 21-23 in Tunis by the Ministry of Communication Technologies and Digital Economy and the Council of Europe (CoE).

“Cybersouth aims to strengthen legislation and institutional capacities on cybercrime and electronic evidence in the region of the Southern Neighborhood in line with human rights and rule of law requirements,” the COE said in an information note. The initial priority areas are Algeria, Jordan, Lebanon, Morocco and Tunisia.

The implementation phase extends over three years with a budget of 3.35 million euros.

President of the National Authority for the Protection of Personal Data (French: INPDP) Chawki Gaddes said a draft law on the fight against cybercrime will be submitted soon to the House of People’s Representatives (HPR).

“The bill, sought since 2009, will help set up a legislative framework and come up with solutions to cybercrime in Tunisia,” he said. Tunisia will likewise be able to join the Budapest Convention on Cybercrime.