HomeFeatured NewsTunisia-Shale Gas: Jomaas government will do as it pleases!
Featured News 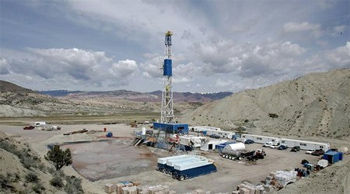 Shale gas, how much progress has been made? Has prospection really started in Tunisia? Are exploration operations now allowed? If so, under which law? What about the shale gas exploration permit with Shell? How Tunisia will cope with what is presented as a great danger due to the exploitation of shale gas? The case of the exploitation of shale gas has kept unleashing volleys of questions. But it seems that the government of Mehdi Jomaa has said its last word. At a meeting Wednesday, Sept. 3, 2014, with editors of various media, Mehdi Jomaa said his government is determined to explore shale gas, saying that critics will not stop the project. Worse! Bids from different companies are currently in the study phase, according to him. This statement was not to the liking of environmentalists.

In a statement to Africanmanager, Achref Gharbi, a former member of the association “AgricoForest” reiterated the rejection of any use of this exploration technique in Tunisia, noting that the case will not go unnoticed especially before NCA members who are working on it.

He further said that the civil society will not wait or stand idly before this technique which he described as dangerous.

Achref Gharbi expressed his surprise at seeing the UGTT support the exploration of shale gas in Tunisia, bearing in mind that the trade union organization has urged the government to start the exploitation of gas shale in southern Tunisia, “Algeria has completed all explorations and will start operation of shale gas. This operation will facilitate the granting of loans to Tunisia it needs globally, “Deputy Secretary General in charge of Studies Anouar Ben Gaddour said in a recent statement to Africanmanager.

For his part, the Chairman of the Committee on Energy and Productive Sectors in the NCA, Shafik Zarguine did not rule out that the government take advantage of the election period to pass this law, like what had happened with the Law on the Dignity Fund for the victims of the dictatorship, approved late at night by members of the NCA. That move was considered “a stab in the back” by many Tunisians.

He recognized, in the same context, that agreements for prospection and exploration have also been issued to foreign companies.

The MP added that the said committee will meet next week to discuss the matter in the presence of Prime Minister Mehdi Jomaa, who will be called upon to provide explanations on the subject.

International studies suggest, in fact, the availability in Tunisia of a considerable stock of shale gas, estimated at five trillion cubic meters. In a recent statement to TAP, the central director of production at the Tunisian Company of Petroleum Activities (ETAP), Yassine Mestiri said that this stock can be operated for 80 years, noting that this type of gas could be one of the solutions to reduce oil imports by Tunisia. ”

Meanwhile, Sofiane Reguigui, president of the Tunisian Association of Transparency in Energy and Mining (ATTEM) told us recently that Tunisia is not even ready on the legal and tax levels (Code of Hydrocarbons).

He said the exploration of unconventional oil such as shale gas, is based on new technologies, namely horizontal drilling, hydraulic fracturing; however in most of the cases the latter requires the use of huge amounts of water to which are added chemicals that are more or less harmful. “These products are a direct threat to water resources and the environment. Especially since, to date, there was no legislation to regulate the use of chemical products, “he said.

Furthermore, a report from the National Energy Board found that in the United States, each well of the Barnett Shale formation in the Fort Worth Basin (Texas), requires some 11 million liters of fresh water during hydraulic fracturing. The collection of a large volume of fresh water in the natural environment, even for a short period of time, could have effects on aquatic and wetland ecosystems, drinking water wells, agricultural irrigation systems or any other use of water.

In addition, each gas recovery operation is accompanied by greenhouse gas emissions that contribute to climate change. Each drill occupies a ground area of about one hectare (10,000 m2) during drilling. After the drilling period and throughout the operating period, each wellhead occupies several tens of m2 (the equivalent of a barn) at the center of a “reserved” area of approximately 1.3 hectares.

Furthermore, each well can produce four million wastewater, water that will be mixed with highly corrosive substances or carcinogens such as benzene, and even elements that are radioactive such as radium.