HomeFeatured NewsTunisia-social funds: situation is worrying, but there is no rush!
Featured News

Tunisia-social funds: situation is worrying, but there is no rush! 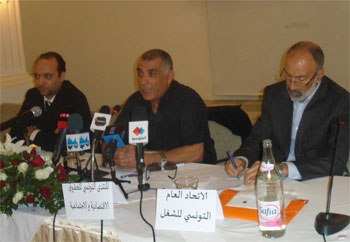 The deficit of social funds in Tunisia (CNRPS, CNSS, CNAM), which continues to grow, requires urgent solutions from the state, and this in close coordination with the various social partners.

Messaoud Romdhani representative of the Tunisian Forum for Economic and Social Rights admitted on Thursday, February 20, that the situation is more difficult than ever, but it is not catastrophic because funds are public institutions that are guaranteed by the State.

According to the latest statistics, the deficit of these three funds is constantly getting worse to stand at 240 million dinars. This is due, according to him, to the socio- economic policy adopted by Tunisia for several years. This policy is based primarily on limiting recruitment and the emergence of new forms of precarious employment. Added to this the privatization of several public companies, overruns in funds and lack of control, he says while also citing improved life expectancy.

These findings are backed up by U. N. High Commissioner for Human Rights. According to a study conducted in 2012, several shortcomings have been identified.

Mehdi Ben Brahem, representative of the Commission pointed to the rising rates of poverty and unemployment whose impacts are more negative on the social security system. That study also showed several weaknesses linked to the issue of accessibility and eligibility.

He believed that the important thing now is to take into consideration threats to find a solution to the crisis that threatens to undermine the sustainability of the pension system instead of setting the retirement age at 62 years against 60 now or increasing contributions.

For his part, Abdelkarim Jrad, Deputy Secretary General of the Tunisian General Labor Union (UGTT), noted that the overall reform of social security systems requires a lot of time, adding that the labor organization has sounded the alarm since 2005, but nothing has been done.

How to help banks to overcome these problems? Abdelkarim Jrad calls for the adoption of good governance in the management of funds and especially in executive boards.” The three partners should be represented fairly in the executive board, he also indicated.

Addressing financial resources, the union leader stressed the need to diversify sources of funding to deal with the increasingly worrying deficit, while calling for the rehabilitation of public health sector to be able to face competition on the basis of an appropriate health plan.

He, on another level, stressed the need to preserve the social equilibrium which is also a prerequisite to ensure this independence.

Why not a code of social security?

Egypt, US to bolster trade cooperation