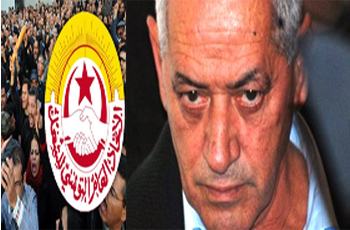 In his speech on the commemoration of the fourth anniversary of the Revolution, the SG of the omnipotent Tunisian General Labour Union (UGTT) Houcine Abassi said, in particular, that the UGTT will not accept to be confined to the square of claims.

Yet, it is good to remind the employees’ boss, apart from his hegemonic participation in work of the Quartet, the echoes of strikes and social tensions were the main weapons of “struggle” and social action of the UGTT.

Figures from the General Inspectorate state that the number of strikes increased 13% in 2014, 33% of them involve purely indirect claims (wages) and 48% had an indirect protest nature (improving working conditions). The Tunisian press has rarely heard that the UGTT had asked to play a role other than that of workers’ rights advocate.

Strongly supported by the UGTT and not always rightly, bearing in mind that at least 48% of the 2014 strikes were not legal, the new strike could even lead to the fall of a minister, though a longstanding trade unionist.

For Transtu the open strike started since last Monday is expected to cost a net loss of 420,000 TD in just 3 days. For the phosphate transport company, it is a net loss of 40 MTD in a single month because of the strike that members of a labor union defending workers stand against other independent workers that carry phosphate on behalf of the CPG.

As to the latter, production fell by 59% while sales plunged 45%. Downtime ranged between 42 and 309 days for the CPG, according to sites, while these stoppages for the Tunisian Chemical Group (GCT) are estimated at 76 days on average, and the group’s units have operated only up to 66% of their capacity.

Annually, strikes cost billions of dinars to a Tunisian economy which has nearly 50% of its GDP in debt. Annually, there are also increases in several million dinars for salaries of civil servants who become bloated and cost over 8 billion TD to state budget without any return in productivity or improvement of public administration services.

With no mercy for the financial capacity of a State where production, export and investment are down since 2011, the UGTT has abused the right to strike to pressure the five governments of political transition to increase wages to the chagrin of employees’ productivity and the competitive power of the company that employs them.

To the detriment of the importance of a national company like CPG (Gafsa Phosphate Company) in a fragile economy like Tunisia’s, the UGTT has never raised its voice to call employees to order and work and even less to denounce any strike in the mine basin.

On all fronts, in almost all sectors, the UGTT pushes to strike without any concern for more than a million other employees held hostage in Tunis and in several other cities. It strikes and will do it again, when the days of account come and that the government would dare to carry out its threat of withholding strike days.

Since the revolution, the UGTT has become the weapon of mass destruction of the economy! So now all that is left to it are the patron saints (as said by General Rachid Ammar) to defend it against this social ogre.