Tunisia: The man who burst the bubble! 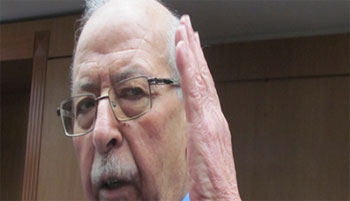 In a Tunisian economy, which is far from being rich in foreign currency and that has found itself in recent months locked in “a hollow area of drawdown on external loans” came what the Governor of the Central Bank of Tunisia describes as “violent economic factor.”

Between the last week of April and the first week of May, several local and Tunisian-law companies suddenly submitted requests to purchase foreign currency. They are basically Tunisiana which has to expatriate 98 MUSD of profit, authorized under the Tunisian legislation on investment, Stir (Tunisian Refining Industries Company), which needed U.S. $ 60 million and STEG with $ 57 MUDS. This, plus the needs in foreign currency expressed by the National Company of Petroleum Activities (ETAP 67 MUSD) and the National Board of Trade (U.S. $ 10 million).

– A monetary bubble created by the inter-bank market.

Within a few weeks, the market faced a demand of 350 MUSD. In their urgent request, clients appealed to more than one bank. Banks are steered and panicked to try to hedge against risk.

To this were added reports, although denied, of a devaluation of the Tunisian Dinar. This, plus the effect of speculative companies that have a Foreign Currency Account. All this has brought about a panic in the exchange rate on the Tunisian financial market and shook the Tunisian Dinar which saw its rate declining.

We had seen its effects until Thursday, May 16, 2013. The Euro had reached 2.15 DT and the U.S. dollar was at 1.64 TD. For the Governor of the Central Bank, what is now called a “money bubble,” was half-expected, given the “downward trend of the TD, which began well before the revolution.

According to Chedly Ayari, “it reflects the fundamentals, a bit shaken, of the Tunisian economy and the system that wore itself out from 2009.” He recalled, in soothing words, as to demystify the phenomenon and reassure operators that the Tunisian currency had been devalued against the U.S. dollar by 12% in 2005, by 7% in 2008 and by 8% in 2010.

“We were travelling abroad, but we were hanging on our phones and we managed the situation very well with the department concerned,” said Chedly Ayari, Governor of the Central Bank, who spoke in a tone, rather serene. “Our goal was to reduce the rate in the right limits and stabilize the volatility that was excessive.”

A “money bubble” has therefore been created, but artificially, despite the existence of, rather structural, economic causes. Indeed, for Chedly Ayari, this bubble was created as a result of interbank exchanges and speculation, which would allow its control.

BCT has intervened, despite its foreign reserves which fell to 99 days of imports, to inject currency on the interbank market in order to calm the turmoil.

This regulatory role “within the limit of 1%” of the volume, as stated by Chedly Ayari, would have cost it, from the beginning of the year until April 1, for example, 1.6 billion DT.

This, plus the recent interventions to stabilize the Tunisian currency. It will even end up, according to a statement distributed at the briefing, to exchange the dinar for 2.14 Euros, against a peak of more than 2.2 and for 1.64 U.S. dollars against a peak of 1.69.

– It announces more resources to come and considers limiting FCA

BCT plans, in any case, to continue to put pressure on the interbank market if not to bring the comparative rates to their levels in early 2013, at least to stabilize the market and exchange rate of the Dinar and avoid its downward slide to uncontrollable levels.

Governor Ayari announces that Tunisia has decided to early use the draw on the initially stand-by loan granted by the IMF (International Monetary Fund), originally scheduled for 12 months after the signature. A budget of 750 million USD in foreign currency (150 upon signature on June 7 and 600 MUSD, between September and December this year) should thus increase foreign exchange reserves. He also announced Tunisia’s decision to borrow once again from the international financial bond market, with a new U.S. guarantee for 500 MUSD and a new Japanese guarantee equivalent to 400 MTD which is the second installment of the Japanese loan.

All of these resources, even if they fail to meet the needs of the Tunisian budget in external resources will manage, anyway, at least as the BCT hopes, to calm the interbank market.

But the BCT also considers reviewing regulation of the FCA. So far, companies with business accounts in foreign currencies have had the right to hold all of their foreign exchange earnings over a period of one year. “Shortening this period to only three months is under study,” says the Governor of the Central Bank, as a warning to speculators.

Chedly Ayari is aware that “this is a strong signal, which can have a high impact and scare the Tunisian private operators.” He reminded them that “last October, holders of FCA were reminded of their obligations and they did nothing.” Those who have ears should hear!

Tunisia: reported investment projects in industry down 21% at end August