HomeInterviewTunisian billionaires transfer up to 45% of their wealth abroad
Interview

Tunisian billionaires transfer up to 45% of their wealth abroad 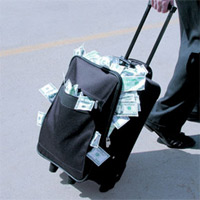 Faced with growing concerns about money laundering, Salah Riahi, President of Transparency First, calls for the implementation of several actions. According to him, the minimum is to activate the legislation in force.

Can you tell us about the reality of the fight against money laundering in Tunisia?

Under this Act, the Tunisian Financial Analysis Commission (CTAF) is established by Article 78 of the Act of 10 December 2003 on the support of international efforts against terrorism and repression of money laundering as amended and supplemented by Law No. 2009-65 of August 12, 2009 at the Central Bank of Tunisia.

Are there clear estimates in terms of money laundering, the level reached by Tunisia in this direction and the accused sides?

Locally, there are no recent statistics published on this issue. The report published by the Tunisian Financial Analysis Commission is relative to 2010, and I do not understand the usefulness of this publication.

However, foreign resources tell us that there is an increase in the number of open cases. For example, in the list of countries that transfer dirty money to Belgium, Tunisia came fifth! In total, 23 cases of political corruption were opened in 2011 by the Financial Information Processing Unit, CTIF more than the 9 opened in 2010, although all have no link with the Arab Spring. CTIF has uncovered more than 23 million Euros of questionable money in 2011.

In its annual statement issued Monday, May 14, MROS, the communication office in money laundering in Switzerland, which treats reports of suspected money laundering, reported a “dramatic increase” in Suspicious Activity Reports (SARs), or 40% between 2010 and 2011.

The amount of assets involved also increased sharply. Indeed, with a total of 3.3 billion Swiss Francs (2.75 billion Euros), it exceeds the sum of the two previous years (2009-2010). Concerned countries are Egypt, Tunisia, Libya and Syria, and for a smaller share Côte d’Ivoire.

According to the study “World Top Fortunes in 2012”, published on June 7, by the very serious U.S. firm Boston Consulting Group, rich Tunisians are in North Africa those transfer most illegally their fortunes abroad. In the ranking of countries experiencing capital flight, Tunisian billionaires expatriate up to 45% of their fortune ahead quite widely of wealthy Moroccans (30% of their wealth). Tunisian illegal transfers are carried out mostly through hidden commercial activities (false invoices, front companies abroad …) complicity of families abroad (children studying abroad …) or simply by having use of the suitcase full of cash.

What should Tunisia do to cope with it?

Several actions must be taken. The minimum is to activate the legislation in force. Law No. 2003-75 of December 10, 2003 as amended by subsequent legislation contains several provisions. However, an environment of impunity has prevailed since the Revolution of January 14, 2011, prompting even the perpetrators of money laundering to continue their business without fear of repression. Moreover, the technical skill sought to control money laundering is not really available because of the following:

– Current regulations of associations do not allow efficient control of their funding source,

– Current bank governance does not promote a level of transparency to detect these operations,

– Lack of an adequate information system for the majority of banks, which did not allow detecting transactions suspected,

– Lack of adequate skills in detection of suspected transactions,

– The mechanisms for effective control of these transactions are rendered meaningless. The system is designed primarily to fight against terrorism; money laundering is a subsidiary issue,

– The current legal framework is insufficient to identify, control and treat this phenomenon in reasonable time.

As president of the association Transparency First, is there a proper strategy to fight against this phenomenon and ensure financial transparency?

I think that such a strategy has never existed. The results are there: last January, Global Financial Integrity had estimated the illicit flight of Tunisian capital to 16 billion U.S. dollars per year over the period 2000-2009. These Illicit funds are due mainly to corruption, kickbacks and other criminal activities despite the existence of a complicated array of regulations emptied of their effectiveness.

A review of all legislation governing this issue is necessary in particular the above-mentioned Law No. 2003-75 of December 10, 2003 which led to all these malpractices by the Ben Ali regime. But the work is not limited to enacting laws. French sociologist Michel Crozier said: “we do not change society by decree,” which implies that the spread of the culture of transparency is the best way to fight against the phenomenon of money laundering.

BADEA holds first board meeting of 2013 in March