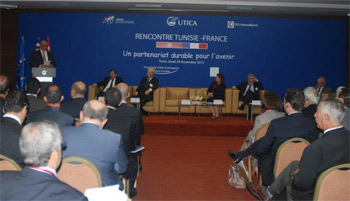 Going beyond all the events induced by the support given by Paris to the former regime, Tunisia and France are redoubling efforts to forge new partnerships.

It is in this context that came the Tunisian-French meeting which took place on Thursday, November 29 at the headquarters of UTICA, on the theme “lasting Partnership for the Future.”

“It is not a coincidence that we chose this theme. We will not rewrite history. It is what it is with its teachings, its satisfactions, its successes but also its failures and misunderstandings, «Wided Bouchamaoui, President of UTICA said at the opening of this meeting.

According to her, it is time now to work with probably other approaches, other methods and partnership concepts. “A political consensus seems to be emerging, however, to clarify the horizons and pave the way for the establishment of the rule of law, freedom, and respect for institutions,” she said.

She added: “This will only reinforce the business environment, which is the natural and vital environment of businesses and investors, strengthen the argument of the attractiveness of the Tunisia site, while enhancing the image of our country quite tarnished in recent times.»

In the same context, Vianny de Chaulus, President of ICC International, stated that “this challenge depends on the consolidation of partnership with the European Union, especially France.”The future of our growth hinges on a renewed partnership in a spirit of respect and exchange of experiences.”

For him, the demographic, economic and energy future should be based mainly on stability and security. This is a strategic approach to find new partnership projects and create job positions. For this reason, Tunisian firms are urged to improve their competitiveness, which should be measured by their regional environment.

Prime Minister Hamadi Jebali said, in turn, that it is a feasible challenge, especially with Tunisia’s access to the European Union Privileged Partner status. According to him, it is an advantageous opportunity not only to promote the competitiveness of Tunisian enterprises, but also to strengthen the ties between Tunisia and France, the largest trading partner of Tunisia.

As a reminder, France is the largest foreign investor in Tunisia. Until the end of October 2012, 103 projects have been completed with amounts of around 90 million Euros. Trade amounted to five billion euros.

With these figures, efforts are underway to establish transparency and institutional stability and enhance security to improve the climate that prevails in Tunisia and boost the dynamics of business, trade and investment.

How to win this bet?

On this issue, Hamadi Jebali said that “the government is now focusing on the revision of the investment code which is making significant progress. The restructuring of the banking and financial sector and the development of infrastructure remain strategic. Added to this is the promotion of vocational training.” The desired goal is to find new industrial zones,” he added.

This day, deemed exceptional, helped pinpoint some issues of concern such as cumbersomeness of the administration and communication problems that still hamper the achievement of common goals. Hence, the importance of implementing short-term measures to address them and ensure partnership between the two countries, but also between Tunisian and French companies.

African Manager - Economic and financial news in Tunisia and in the world.
Contact us: cont[email protected]