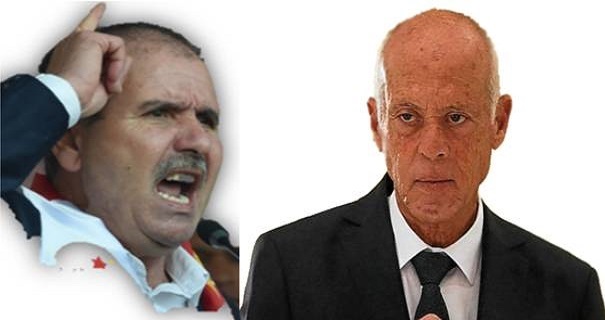 The omnipotent Tunisian labour union now spearheading everything that opposes the political project of Kais Saied, on Thursday, held its general strike, with the sole support of the five parties challenging the head of state: Ettakatol, Al-Joumhouri, Al-Qotb, Attayar and strangely the Workers’ Party.

Tunisia shut down on Thursday, and we do not believe that this is the only time this year. A day, where we have seen the unthinkable, that of workers and their boss former employee at the state meat company “Ellouhoum” and one of his children at the head of the union of another public company, celebrating the cessation of production in an economy that struggles to find salaries for its own officials, with a growth of 2.4%, unemployment at 16.1% and inflation at 7.1%.

This strike by workers and employees of 160 state enterprises, with the private sector only in Sfax.

The reasons for a foretold strike

Officially, the general strike of the Kais Saied’s era would follow the failure of a conciliation session held on June 13 between the government and trade unions, in the wake of the interruption of dialogue between the union and the government, which announced its major reform program.

The UGTT also demanded the cancellation of the exceptional social contribution of 1% in favor of the state coffers for employees and opposed any reform concerning state enterprises. Unofficially, this 1st general strike of the Kais Saied era is the new act of the standoff between the UGTT and the political project of the Tunisian head of state Kais Said, which the “National Dialogue” is the Gordian knot.

The union certainly defends itself. It is nevertheless true that “the strike takes place at a time when the Tunisian president, who took full powers eleven months ago, is under fire from the opposition for having excluded it from a national dialogue supposed to lead to a new Constitution that he must submit to a referendum on July 25,” recalled the newspaper Le Monde.

The newspaper added, in the same article, that “the UGTT has turned down an invitation to participate in this dialogue, believing that it aims to “endorse conclusions decided unilaterally in advance and to pass them by force as faits accomplis. The political connection of this strike is there established, and the socio-economic aspect was only an alibi.

Bloomberg, for its part, headlined on Thursday that “Tunisia shuts down as leader, union face off over IMF deal”, also subtitling that “Strike may force officials to tone down austerity steps.” The site thus highlights the other economic aspect of this general strike, without the private sector. However, it concerned on Thursday, June 16, 2022, a civil service that develops very little added value in the GDP, and state enterprises already publicly known little productive and totally in deficit. As for the tax system, it is regulated by strict and well-known deadlines, and will therefore end up being recovered by the State coffers!

A general strike, which usually does not bother anyone!

Operator on Tunisia in business consulting and marketing on networks, Nizar Elbez says in a Post on LinkedIn, “honestly, I do not think that the strike of public institutions for a day or even a week will be felt. In Tunisia, we are used to a slow administration; the work of 5min takes 1 week (…). You can stay on strike as long as it takes, we are used to it.

The economic operator added that “they may have defensible causes; I do not know. But we must, at some point, find other ways to say “NO” without slowing down the national economy that is already struggling.”

A feeling that seems to be shared by most of the Tunisians; in any case the thirty comments, 400 reactions and twenty-two thousand impressions to this post, except perhaps those directly affected by air transport.

This feeling of weariness of social protests seems to us quite shared, even if it is in the silence of lambs, by Najla Bouden’s government, very relaxed this morning in the Cabinet meeting, who knows very well that she is only the indirect target of the wrath of Noureddine Tabboubi. His union is, in fact, more than very well informed of the figures of the economic crisis, and the financial situation of state treasury.

“The UGTT has shown itself capable of paralyzing the country and cause it losses in image and finance by stopping work for a day. I challenge it to be able make the same people to whom it wants to pay without giving the equivalent in work to work for half a day,” citizen Mohamed Bouzaiane said on AfricanManager, as if to close the debate on this strike that does not bother anyone.