Where the Dinar is going? 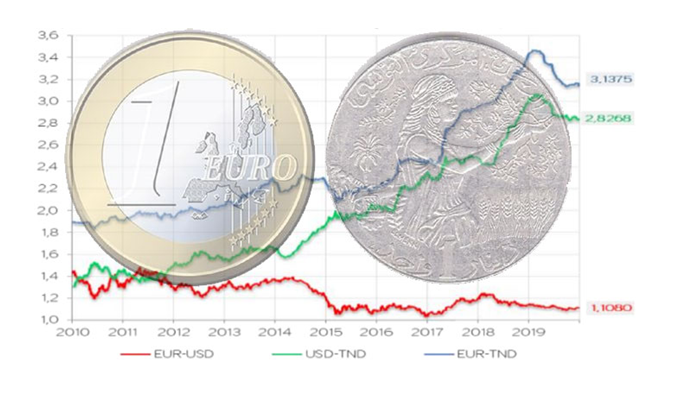 In a recent research note by Tunisie Valeurs (T.V.) on the economic year 2019, the prospects for the current year 2020 and the impact of this situation, as well as its projections on the health status of the Tunisian Dinar (TD), the stock market analyst concludes first of all to a mixed economic situation.

T.V. therefore recalls that “despite the slowdown in growth prospects in 2019, Tunisia’s economic indicators show a certain recovery in 2019”. It cites the examples of the slowing down of inflation, the drop in the budget deficit, the gradual recovery of tourism and finally the relative improvement of external balances reflected in the consolidation of the reserves and the retracement of the dinar.

For 2020, T.V. is in line with the government’s forecast of 2.7% growth (compared to IMF projections of 2.4%), and explains this by an expected improvement in agricultural activity and the recovery of non-manufacturing industries, notably the increase in phosphate production and the entry into operation of the Nawara field that was recently brought into operation and Halk El Menzel.

The T.V. analyst goes on to say that “the recovery in tourism prospects, the expected rebound in exports resulting from a good agricultural season, and the reduction of the energy deficit, should continue to support foreign exchange reserves”.

It is added that “the tightening of the budget deficit will encourage a further deceleration in prices and will once again avert the spectrum of a sovereign debt crisis.” Tunisie Valeurs went so far as to speak of a gradual restoration of investor morale. So far, so good.

Without being blissfully optimistic, the analyst of Tunisie Valeurs is realistic and predicts that “despite twin deficits that are better controlled, the economic situation remains delicate”. For him, an anaemic growth close to 1% remains an “unsustainable” situation and the recent developments in foreign trade seem worrying.

In this regard, the analyst cites the slowdown in exports and imports of raw materials for strategic sectors such as the agri-food and manufacturing industries, to affirm that all this does not augur well for a rapid recovery in activity in the future.

The research note finally asked the question about the health of the local currency, in all this situation which, without being completely catastrophic, remains morose with a tendency towards tightening.

Where is the dinar going?

Regarding the behavior of the Tunisian Dinar in this gloomy economic situation, T.V. believes that “since March 2019, the foreign exchange market has operated in relatively calm conditions that have allowed the dinar to gain resilience, appreciating 8% against the euro and7% against the US dollar (in 2019)”.

The financial analyst of T.V. explained this behavior, or this retracement, first by “the good dynamics of the foreign exchange supply, due to the good performance of tourism receipts (receipts of €1.6 billion, at the end of November 2019, the highest amount since 2010), as well as remittances from the Tunisian diaspora (+15% to €1.3 billion at the end of November 2019). But also the inflow of foreign currency in the form of drawings on external financing lines by the financial sector. This is besides the revenues from the privatization of the Zitouna group and high interest rates which have mitigated the negative expectations of economic agents and encouraged them to convert their foreign currency assets (held in particular in the form of business accounts in foreign currency) to invest in dinars or to invest instead of borrowing at expensive rates”.

According to T.V.’s research note, the retracement also stems from “a stabilization of the demand for foreign exchange, in connection with the restrictions of monetary policy and prudential regulations that have made it possible to slow down purchases of foreign exchange financed by credits in dinars obtained from the banking sector”.

The question remains, therefore, as to whether this stabilization is circumstantial or lasting.

The analyst recalls that the course of the dinar in 2019 is partly dependent on temporary factors such as the revenues from the privatization of the Zitouna group. He believes that the supply of foreign exchange from economic agents (whether speculative or not) is limited and that the external financing of the sovereign debt is not infinite.

However, “there are factors that lend optimism on the continuation of this reconciliation with the national currency”, believes T.V. It recalls, in this regard, the continued recovery of tourism, the good date and olive oil production in sight and the reduction of the energy bill (-30% in 2020 according to government estimates).

These are all factors that will support the dinar,” says T.V., explaining that “all the arguments mentioned above support the thesis of a more controlled fluctuation and a smaller “confidence interval” for the dinar compared to past years that saw double-digit changes in the national currency.

Note finally that on October 27, 2019, date corresponding almost to the office-taking of Kais Said in Carthage, the Euro was trading against 3.1438 TND. On February 3, 2020, it was traded 3.1139 TND. The depreciation is very slight, and it may reflect the wait-and-see attitude and uncertainty in the markets on the end of the transition government in Tunisia.

And as a solution, T.V. proposes the control of the trade deficit, the national mobilization to pull the mining basin out of immobility and to support the competitiveness of our exports and by a recovery of investments, mainly foreign investments. So a word to the wise!

Tunisia : Mission of businessmen in Netherlands

Tunisia: “Brexit will have no effect on Tunisian tourism” (Minister)