HomeFeatured News2020, the year of all dangers for tax evaders. Who will follow...
Featured News

2020, the year of all dangers for tax evaders. Who will follow in footsteps of Chalghoum? 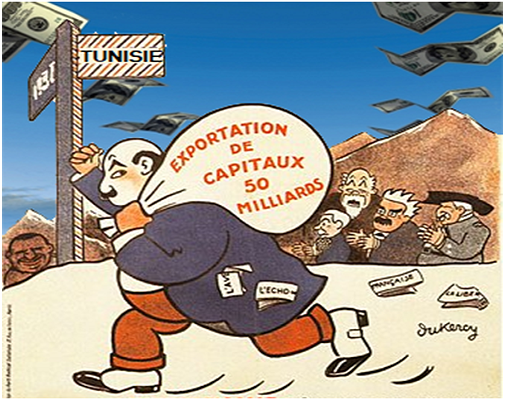 “The State budget for 2020 has been prepared as part of the government’s ongoing plan of action to promote economic growth and control major fiscal balances, while continuing to support the policies of social inclusion of vulnerable and special needs groups “. Thus spoke the “Zarathustra” of the State budget for 2020 in Tunisia.

In the budget area, this plan of the outgoing government in Tunisia aims to control the budget deficit and reduce it.

A deficit rate whose forecast is already controversial and this is a euphemism, between the Ministry of Finance and the World Bank. The latter has released a figure, apparently wrong but extracted from Tunisian official documents that were only very late updated, withdrew its document after protest from the Ministry and promises another after verification with its experts.

While waiting for a government, whose composition is already very difficult and could last several weeks, the plan of the government of which it will not be responsible because it would become an outgoing government, aims in particular to support the state’s own resources by taking advantage of positive spin-offs from growth.

In the 2020 budget document, the Tunisian Ministry of Finance announced that it would “take further measures to strengthen extraction and promote transparency and to combat tax evasion and the phenomenon of the informal economy, owing to its negative repercussions”.

These are vast projects, for a government that knows that it is outgoing and a government to come, whose directions we do not even know, if one day it came to be formed before 2020, and if it came to have the vote of confidence of a new Parliament that has not even met yet.

It wants to increase resources by almost 10%, and then maximize returns. To do this, the department plans to take a number of actions that will, in theory, give a little more hand to tax auditors and increase their performance.

According to the budget document, it intends to “strengthen the instruments of investigation and survey of the failures or weak points, which would explain the lack of enthusiasm of Tunisians to fulfill their tax obligations”.

The different tax administrations (DGI for the control and DGCPR for the recovery), should thus have access to all the data (banking, financial, commercial and real estate transactions), to help them to maximize and optimize the financial return of the taxation for state coffers.

And to better offload businesses and the reluctant or evaders, the latter has now to operate unexpectedly, through tax audits, ad hoc, and no longer every 4 years.

Tax adjustments will be more difficult to suspend due to court litigation. The tax authority, which will not wait 4 years to settle in your home, can take a copy of any document he wants, in-situ and without waiting for your accountant to send it.

In a nutshell, 2020 should be the year of all dangers, especially for tax evaders. An evasion which would cost each year 1.5 billion DT, and represent according to the latest figures, a shortfall of 25 billion for the state coffers.

Limit cash in tax offices that only accept cash?

The ministry also plans to take steps to limit cash transactions. We remind the Minister of Finance that the tax officers, the place where the various taxes are paid, still do not accept checks, except to be guaranteed by the bank, which is not free and immediate among Tunisian banks. It is also reminded that no tax office has an electronic terminal that would allow payment by credit card.

Another tool and not least which the Tunisian Ministry of Finance intends to use against tax fraud and evasion will be the activation of information exchange agreements and administrative assistance in tax matters.

Thus, the Tunisian authorities can now ask any country to provide the financial situation of any person, physical or moral, suspected of hiding money abroad without paying taxes. The Money Laundering agreements will allow it.

The ministry also counts, as it says clearly in the text of the draft State budget 2020, to revise the texts concerning the prices of the transfers between companies of the same group. The idea is to avoid the transfer of profits via the tax base.

What about bank agreements? And the cash registers? And lawyers and doctors?

It would also be advisable for the Ministry of Finance and the Central Bank to provide a good legal framework for agreements between companies in the same group, notably Tunisian banks that are subsidiaries of foreign banks. Those agreements have so far remained the source of outflow of a lot of foreign currency under assistance agreements, sometimes for services that can easily be done in Tunisia. It would be advisable, too, to review the

privileges granted to some foreign affiliated banks to pay only the minimum tax, because forced to “clean” their non-productive or downright bad loans.

Bad credits are first and foremost a management responsibility of each bank. Mismanagement however results in profits for banks selling their bad credit to their own collection companies, for almost nothing, and then cashing the profits of these collection companies. This is called, for some, tax optimization. But this is actually tax evasion.

Lastly, the Minister of Finance was told that he had promised to put into effect the late Slim Chaker’s decision on cash registers connected to tax offices for certain service activities, such as restaurants, cafés and other tea houses.

He is also reminded of the agreements signed and not implemented to force various liberal activities, such as lawyers and doctors, to pay their taxes.

The question remains, who will work in this strategy of optimizing tax revenues in a Colombian-style ARP? An ARP where there are, for example, more than 70 lawyers and who will have more immunity, as well as some smugglers, some businessmen and other pressure groups who will not miss a new revolt against this renewed will of the state to fight against tax evasion.

Who among the “honorable” MPs will not rise against all these measures? “Only when everyone pays the state what they owe, can we applaud this replica of the revolution that have been applauded for a few days by these young people who want to change the Constitution, forgetting that a hungry stomach has no ears, “commented to Africanmanager a financial source who requested anonymity.

President of the African Caucus urges the combat of illicit financial...