A country blocked… for 10 years! 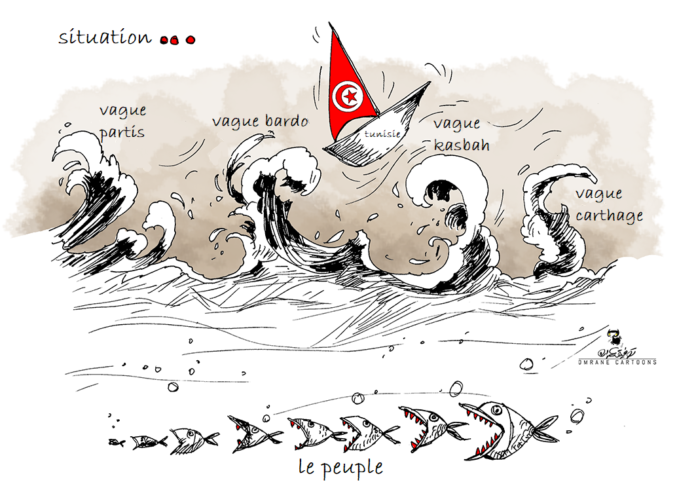 The oil pumping is blocked, and the army is retreating in front of those who have once again closed the pumping station.

Phosphate production is blocked, and for any solution to this problem, one can imagine in the new Tunisia importing phosphate to keep the factories running and to pay wages.

The Parliament is blocked, and its halls and offices are transformed into playgrounds, with the women of Ennahdha as the stars of Monday July 20, 2020.

The government is blocked, since the resignation of Elyes Fakhfakh, under the pressure of the evidence accumulated in the case of the conflict of interests that has shaken the Kasbah since last June.

The Prime Minister could also be blocked, if one refers to the request of the INLUCC to ban him from travel, against the backdrop of the “Fakhfakh-Gate” affair.

The prospects of forming another government with the same “composites” of the former one are also blocked for the moment.

The Tunisian Head of State, Kais Saïed, is consulting the lists of proposed names and gives no signal.

The various lobbies are each pushing their pawn, or what they believe to be their queen, on the chessboard of social media, while the people hope that Saïed will not be mistaken once again about the most “competent” person to propose.

The country’s economy is stalled by the delay in the rescue plan that the prime minister was to announce before his term of office began to spiral out of control.

Tourism is blocked under the devastating impact of COVID-19, and 2020 is expected to be a last year.

Public enterprises are stuck in the structural deficit situation they have been in since 2011. But also by social tension that will not go away.

Private companies are blocked by the lack of new projects and by the unpaid debts of old ones.

The country’s finances are blocked by the fall in state resources, due to the decline in fiscal flows from companies that are still unable to get back on their feet. The State is blocked, and turns again to the IMF to get into debt.

Minister Nizar Yaiche is blocked by the effects of announcing measures that he cannot afford, or that will require laws to come into force.

Minister Mohamed Abbou is blocked in his fight against corruption that no longer has any limits, and where the various investigation and control structures are tangled up and sometimes cross swords.

The Minister of State Property is stuck in the recuperation of plots of land squatted by small people in the four corners of the country, and in his obsession to bring some families to their knees through confiscation.

The Minister of Employment is stuck in an economic model that no longer produces jobs.

The Minister of Health is stuck in managing the new wave of Coronavirus, which is coming from Tunisians repatriated from abroad.

The Minister of Defence is blocked by the Kamour revolts, which prevent him from securing the oil wells.

The Minister of Public Works is blocked by the exhaustion of the financial means that would allow him to finance projects.

The labor organization UGTT is blocked in its sole purpose of increasing wages and implementing agreements, still wage agreements, which the new government no longer has the means to implement.

Utica is blocked by the demonization of businessmen, the absence of any political and economic perspective, while many businessmen are blocked either in prison despite having signed reconciliation agreements, or by travel bans.

And all this in the Tunisian-style sham of democracy that has been going on for the past few days at the Parliament, where turbaned women are playing Women’s Hammam , and former lawyers are playing harem guards and concierges for the S17 and other bandits.

All of them, either renters, smugglers, or state employees who do not lack the means to survive well, do not care about all these blockades … which have lasted for 10 years, in a country whose destiny is tossed by all kinds of waves!