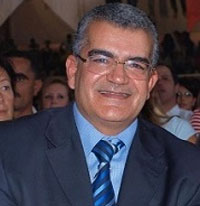 Abdelmajid Mselmi , Executive Board Member of Al Joumhouri gave an exclusive interview to Africanmanager, following the recent decisions taken by the Central Committee of Al Joumhouri party including mainly to boycott the National Dialogue and withdraw from the Union for Tunisia (UPT).

In this interview, Abdelmajid Mselmi acknowledged that the positions and actions of the party are inconsistent and contradictory. He expressed his concern about Al Joumhouri’s decision to oppose the designation of Mehdi Jomaa as PM.

Abdelmajid Mselmi also criticized the way in which the law on the establishment of Al Karma Fund was passed.

What do you think of Al Joumhouri’s positions on the National Dialogue?

The approach of Al Joumhouri party seems in the eyes of many observers inconsistent and even contradictory. How to boycott the national dialogue while our party brings it strong support and believes that consensus is the only way to save our country? How to oppose the choice of Mehdi Jomaa as PM and accuse the Quartet to have had a deal with Ennahdha, while we had commended a few days earlier, the efforts of the UGTT and we stated that we will support the candidate proposed by the Quartet? How to stubbornly support the candidacy of Ahmed Mestiri against the will of our allies in the Salvation Front which responded by an adamant “niet” while we are committed to the unity of the opposition in the Salvation Front? Several observers have seen this as hint to Ennahdha.

The political line of a party requires a certain consistency in decision positions. When the political process is disoriented and positions are inconsistent or even contradictory, precipitated and reactive, the party loses its credibility among activists, citizens and the political elite.

Al Joumhouri party announced its withdrawal from the UPT, do you agree with this decision?

No … I was part of a minority in the central committee that was against this decision to withdraw from the UPT. We always thought that the union of democratic forces is a historical necessity to balance political forces and address the political imbalance that became obvious after the elections of October 23, 2011. The UPT was born on January 29, in a context of strong hegemonic tendency of the Troika on the workings of the state and the use of violence by the LPR to support the troika and keep it in power indefinitely by violence and this was confirmed a few days later, on February 6, by the assassination of Chokri Belaid.

At that time, this union of Democrats in the UPT was a strong message to restore confidence to the democratic family.

The UPT has played an important role in the formation of the Salvation Front which is in fact an alliance between two fronts: the UPT and the Popular Front. This alliance has mobilized hundreds of thousands of citizens in August to oust the government of the troika.

What is the future for UPT after the withdrawal of Al Joumhouri party?

In short, the UPT, despite weaknesses and limitations, is a political front of democratic forces which helps ensure their unity and balance forces against the ruling alliance.

So what are the real reasons for the withdrawal?

The arguments presented by the majority in the central committee, such as the weak structures of the UPT, the absence of a joint program, irregular activities and political differences, are inadmissible. They are understandable weaknesses for a front which is only at its early stage. Moreover, it is absurd to say that the UPT has not turned into an electoral front as some “joumhouris” wish. The electoral alliance can not be on the agenda where as we do not even know the date of the election and their terms.

However, leaving the UPT is a negative message of dissent and division in the democratic camp while it is in full political campaign for the resignation of the troika government. In addition, this message can bring grist to the mill of the opposing camp and can fuel suspicions about a possible alliance between Ennahdha and Al Joumhouri.

Are you for the creation of El Karama fund for the rehabilitation of victims of dictatorship?

With regard to the substance, everyone agrees to compensate morally and materially victims of repression and dictatorship, and this in the context of transitional justice. The problem is not there, but rather in the method with which this bill was passed in the Finance Act 2014, after midnight and without prior knowledge from members of the NCA or the Minister of Finance.

Are you for the appointment of Mehdi Jomaa?

Several politicians who met Mehdi Jomaa find him young, independent, modern and open. His experience in government has not only negative aspects. He is impregnated with government activities and his adaptation period will be short. We must give a chance to young people and rejuvenate the Tunisian political class and stop believing that only Bourguiba’s ministers or those of Ben Ali know how to govern. But I think he needs help and especially avoid being put under surveillance as advocated by certain political parties and shoot at him at the first opportunity. He must be given wide latitude to form his government and he deserves the support of the political class, labor organizations and civil society to enable the government to achieve the following objectives: ensuring the safety of citizens, eradicating political violence through the dissolution of LPR, ensuring the neutrality of the administration, giving a boost to the economy and ensuring the holding of free and fair elections.