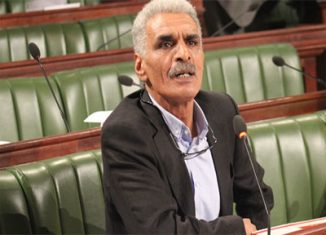 MP representing the Popular Front Ammar Amroussia said the symptoms of a social explosion are very visible, in particular with the rise of social unrest and the mobilization of several sectors to protest against the draft finance law for the year 2017.

On another level, he considered that Tunisia would never share the benefits of the International Investment Conference scheduled for November 29 and 30 November.

Could this current climate, marked by the increase in protests affect the holding of the International Investment Conference scheduled for November 29 and 30?

In this context where the draft finance law continues to provoke the anger of several sectors and organizations, and even the partners of the government in place like the UGTT and the UTICA, Tunisia will never share the benefits of the International Investment Conference.

Like all Tunisians, there is hope for an improvement in the situation, but with this ruling coalition things will deteriorate more and more and the crisis will be deeper.

So what can be done?

This situation prompts us to revise in a structural way the draft budget law for the year 2017 because the text in its current version is rejected by all actors. The rallies of lawyers and pharmacists today outside the headquarters of the HPR is a proof, without forgetting the call of the employers’ organization for mobilization and the threat of the UGTT to observe a large rally outside the House of People’s Representatives and the Kasbah within a week, in order to “put pressure on the government” while calling on its supporters to “prepare for a general strike” before December 8.

In the history of Tunisia, all the governments that tried to provoke the UGTT have failed. This is the case of the national unity government, which runs the risk of experiencing the same fate, especially in this tense climate.

How do you assess the performance of this government?

It is an irresponsible government and it is in the process of fooling the public opinion on the issue of wage increases. The policy inherited from the former prime minister is a good example: he signed an agreement with the UGTT around the increases and at the same time he pledged to the IMF that no increase will be planned in 2016 and 2017.

Similarly, the practice of manipulation is also observed in the draft budget law for 2017.

This budget is spread over ten months, and there are a number of questions at this level, for example, the government will no longer pay the salaries of civil servants in two months?

Through these maneuvers, the government wanted to convince its first boss “the IMF” by lowering its budget for next year.

However, I think this is a bill that irritates all the actors and social partners who have strongly criticized it. It is simply a budget that goes against the principles of the revolution and which aims to encourage corruption while worsening the situation of popular classes.

With this approach, the government is exploding the country.

Can we speak of a social explosion in Tunisia in such a condition?

The signs of the explosion exist in reality and on the ground … We are witnessing a rise in social unrest with several protest movements observed by several sectors and trades, including lawyers, doctors, and farmers, not to mention the anger of former students registered by the police who continue to suffer and who are on the brink of explosion.

These movements come in a delicate situation marked by the persistence of unemployment and regional inequalities, while there is a resurgence of corruption and smuggling.

With these elements, this month of November is likely to be hot and consequently Tunisia risks facing a social explosion.

What is your reading of Beji Caid Essebsi’s speech?

This speech proves that the Head of State is very far from the current problems of Tunisia, and his link with this country remain very weak…

Why do you say that?

Simply because he is behind the deep crisis that shakes Tunisia, and more precisely the first ruling party, Nidaa Tounes, which is already weakened by his departure.

His remarks in the interview given on Tuesday night Al Hiwar Ettounssi channel come to prove this hypothesis and demonstrate that he is himself a mistake in the history of Tunisia.

And what about his position in relation to transitional justice?

I can understand the position of the head of state and especially his absence during the first hearing sessions. Because he is concerned by this important process. Several crimes of torture took place when he was at the head of the Ministry of the Interior, under Bourguiba’s regime.