Tunisia: a 2017 budget that builds castles in the air? 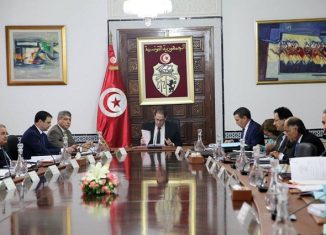 The draft finance Law 2017, which, very schematically, will determine how Tunisia will spend its money, the sums it has and that it has not by the way, i.e. loans, does not satisfy anyone, or almost.

Indeed, apart from its main artisan, Youssef Chahed, few people have fallen under the charm of this text which will preside over the destinies of Tunisia next year.

Lawyers mobilized vigorously outside the Parliament to vociferate against the draft finance law, doctors said all the evil that they thought, pharmacists do not think less, the UGTT, regardless of what the President of the Republic said, has not yet buried the hatches, the employers’ organization – UTICA – drags its feet… In short, nobody is happy. And that gives a clear idea of the difficulty of ruling this country. I’m not even talking about reforming it.

But one thing is certain: The 2017 finance bill will ultimately be passed, with amendments, reversals, compromises and even shady deals, but it will be passed. Because the country has no choice. And everyone who screams against the text of Chahed knows it.

Indeed, Tunisia should have adopted this text before inviting investors from all over the world, at least to offer investors and donors visibility and direction and at the same time show to the world that the Tunisian executive is in control and that it knows how to lead its small boat.

Instead, the country produces discordant and dissonant sounds, which have the worst effect on foreign investors. Certainly they will not say anything, they have too much tact for that, but all this social and political turmoil in Tunisia, whatever affection they have for the cradle of the “Arab Spring”, has enough to cool more than one.

But since it is necessary to project in the near future and in any case it seems the die is cast, think tank Solidar preferred to shed light on the content of the budget law for the fiscal year 2017, to dissect it, particularly a variable that underlies this whole affair: the growth pattern.

In this case, the budget forecasts of the State budget of 2017 are practically realistic, if not pessimistic. Indeed the team of Chahed expects GDP to grow 2.5% for next year, against 1.5% for this year. The government’s version, which is in fact modeled on the 2016-2020 plan, is nevertheless much less optimistic than the five-year plan that predicted a 3% growth rate in 2017 and 2% in 2016.

The projections were cut by 0.5 point of GDP, which is far from negligible. But from this point of view, it is better to have realistic estimates than wacky predictions, inflated artificially which would have the effect of breaking investor confidence.

Flaws in the government’s draft

In the detail of the analysis of the engines of growth, it is the productive sector that will be the locomotive, contrary to the trends noted in 2016. The administration will drain only 0.1 percentage point of growth. “This reflects a favorable evolution of the economy which is beginning to correct the slippage it experienced after 2010, the public sector having developed, until 2016, in disproportionate manner,” says Solidar.

In this new dynamic, according to the state budget of 2017, agriculture will play a central role in growth, rising from -0.4 in 2016 to +0.4 in 2017. Non-manufacturing industries will grow from -0.2 to +0.3 in 2017. However, according to the think tank, these two sectors are highly dependent on external factors. “The planned growth pattern is therefore fragile,” analysts say.

Regarding consumption, one of the engines of growth, “the growth pattern shows that in 2016 and 2017, Tunisians are consumers more than producers. Their private consumption increases much faster than GDP, “says the report by the think tank.

Last year, private consumption jumped 3.6% for a 1.5% increase in GDP. The forecasted rates for 2017 are + 3.8% and + 2.5% respectively. “Not producing enough, the Tunisians consume the stocks accumulated before”. According to analysts, the budget law 2017 has weaknesses at this level. The text should have placed the cursor on the variable supply, labor, production instead of dealing with fundamentals and clichés harmful to the national economy.

It is in this context that Solidar points out the dangerousness of the tax burden on companies in 2017, by striking at productive apparatus. “We are in a vicious circle where the weakness of growth negatively affects the revenue of the State which, in lack of resources, taxes businesses more. This discourages production and slows down growth further, threatening to widen public deficits, “the report warns.

Analysts criticize the Chahed government’s text for ignoring a detailed study of the state’s finances, in general as well as the specific situation of state enterprises and institutions and local structures and the perilous situation of the three social funds (CNSS, CNRPS and CNAM).

This is the same for public debt, on which warned rating agency Moody’s to the point of threatening to sanction Tunisia soon.

On this highly important issue, the government was content to do the minimum service by lending on its 2017 budget the new loans to be contracted, the dates and amounts of repayment.

The government could undoubtedly do better on this aspect, and many others. The confidence of foreign investors, which Tunisia is about to woo on November 29 and 30, depends on it…