Deputy CEO of SNIT: “housing prices between 70 and 100 thousand dinars, and a shortage of land is the main problem” 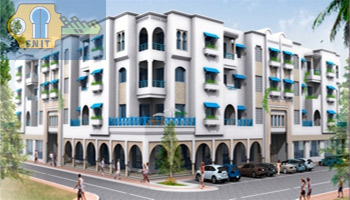 Deputy CEO of the “Société Nationale Immobilière de Tunisie” (SNIT) gave African Manager an exclusive interview in which she spoke of the challenges faced by the company, the increase in prices of homes sold by developers and major projects of the company.
Interview:
The middle class in Tunisia is facing today great difficulties to buy a home through real estate companies especially that prices vary between 100 and 300 thousand dinars? What do you think?
The evolution of housing prices is due mainly to soaring construction material prices. Prices of some building materials have even tripled. Add to this the high cost of the labor in the construction sector in recent years. All these factors contributed to the rise in price per square meter which currently range between 600 and 900 dinars while it did not exceed 400 dinars in 2011.
SNIT seeks to provide middle-class housing with prices between 70 and 100 thousand dinars.
The number of homes for sale reached 1,500 dwellings during this year distributed across Greater Tunis, Nabeul and Zaghouan.
What are the main challenges facing SNIT today?
Land scarcity and rising prices are the main difficulties faced by SNIT because the company primarily targets the middle class. We find it very difficult to buy serviced land at affordable prices.
The company seeks to preserve its role in the construction of social housing, knowing that it is a public real estate company. The company is also mobilizing its financial and human capacities to accelerate the pace of housing construction.
What are the major projects of SNIT for the coming years?
In the region of Omar al-Mukhtar in Sidi Hassine, the number of dwellings to be built by the company will reach 367 social housing units (collective) which will be ready during 2016.
In Ksar Said, the company has already begun work for the construction of 42 social housing units (semi-collective) consisting of one (1) room, two bedrooms, a kitchen and a bathroom. In Ben Arous, SNIT will also build 55 social housing units (individual). 55 new homes were also built in the governorate of Tunis and 135 in Batan, governorate of Manouba.
The Ministry of Public Works has recently announced the introduction of a new policy “hire-purchase” allowing citizens to acquire housing units after getting them as rent, what do you think?
The experience of “hire-purchase” is not new in Tunisia and had been attempted before but experience has shown that people stop paying their debts after three or four years. For this experiment to succeed, we must put in place provisions and apply the law.
SNIT has experienced many problems due to violence and looting that took place in the wake of the Revolution, has the company recovered all looted housing units?
Yes, SNIT was happily able to retrieve all looted homes, which number 800. The cost of maintenance for housing alone was estimated between 9 and 11 thousand dinars.
The company has, however, failed to recover a plot of 70 hectares located in the region of Mhamdia in spite of the company’s efforts to recover it.
Share
Facebook
Twitter
Linkedin
Email
WhatsApp
Viber
Pinterest
ReddIt
Tumblr
Telegram
Digg
Mix
Print
Previous articleNational Dialogue Quartet receives Nobel Peace Prize in solemn ceremony
Next articleTunisia: Monaco contributes to trust fund for marine protected areas

Tunisia about to buy soft milling wheat and feed barley in...

Eliminating torture and the death penalty: EU funds “must be better...