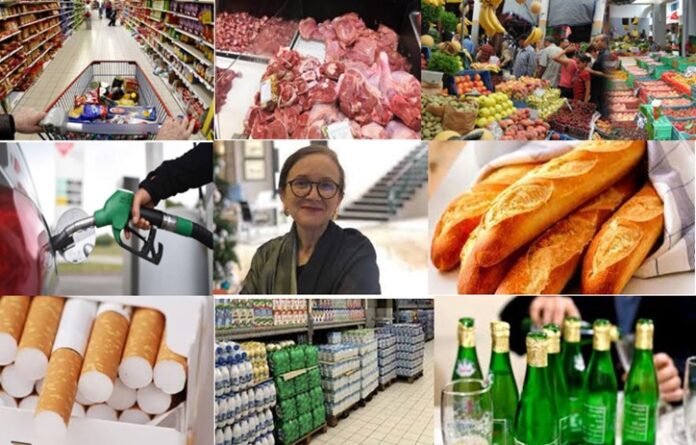 In March 2022, consumer prices rose by another 0.8%, from 0.3% in February and 0.7% in January. And it is hard to find a product or group of products on the INS shelves that didn’t have price increases. Still in small doses in monthly variation, and for many in double digits year-on-year, prices do not stop rising, never have and probably will not, like fuel prices.

The new price increase, the 4th in 4 months for all fuels, will certainly have direct consequences on other commercial and industrial sectors, contribute to more price increases of a multitude of consumer products, and feed the inflation figure a bit more for the next months.

That increase in fuel prices should not be the last one, since according to generally well-informed sources, a liter of gasoline is expected to be more than 3 DT by the beginning of the summer.

Since the famous, and inconclusive, presidential campaigns against the concrete iron, against the cold storage rooms, against speculators of flour, semolina and everything else, the government of the President has made every effort to try to calm the incessant price increases, all prices, without succeeding.

– Price increases, from the inevitable to the immoral

Some of the price increases are inevitable, such as those of fuel, which are linked to global markets, while remaining incomprehensible for citizens. The latter know that the liter of gasoline, like the price of a pack of cigarettes, are stuffed with taxes. The solution to the price increase could be the reduction of taxes, such as VAT and the rationalization of others, because they are intended for companies that are more than in deficit and in perdition.

Other increases are immoral. Some bakeries have indeed begun by refusing, admittedly kindly, to give change, and raise for years the price of the baguette to 0.200 DT instead of 0.190 DT. Other bakeries have ended up refusing to make the baguette and bread from the compensated flour (at least they say so), and each now sells at the price that suits him. Some bakeries only make cheap baguettes during part of the day. The rest is for special breads, sold at a higher price.

As the authority of the state (through the directorates of economic control) is weakening and crumbling, other activities have done the same. We know that the portion of the so-called regulated or administered prices in the basket of the housewife, is almost congruent. But we also know that the various price control services do not do enough, more confined to the offices than on the markets of the regions and towns.

The most flagrant example and source of consumer complaints of price increases, simply by moving from one distribution channel to another, is the big, big difference between wholesale prices and retail prices for vegetables, fruit and fish in particular. However, we know that at the wholesale market of Bir-El Kassaa for example, everything is digitized, and therefore everything is traceable, explainable and the contrary possibly punishable. Do the controllers do it? If so, we would have known about it, and even noticed it on the prices to the final consumer!

However, in order to practice this tracing and price control, it would be necessary to multiply by at least two the staff of the Ministry of Commerce in charge of the economic control, and to harden the sanctions against the offenders. And it could easily be remedied by a redistribution of the 680 thousand state officials, many of whom litter the offices without any profitability and sometimes even without performance.

– The sanction, since last March by the polls

Now in this Tunisia of political and governmental instability and weakness of the State, everyone wants to earn more money, no matter what the means, and even if it means breaking all the protocols of traditional distribution channels. The differences in prices between regions that were observed a few years ago no longer exist. The same goes for the differences between organized and parallel circuits. And even when it had been decided to install points of sale from the producer to the consumer, the producer who theoretically has less charges and less taxes, sells at the same price as the final distribution circuit. And we find the same logic, between parallel trader and regular and patented trader.

In the battle of prices, it is indeed necessary to note that, like those who preceded it, Najla Bouden’s government, or more precisely the government of Kais Saïed managed by Najla Bouden and who does not know what to do to curb the continuous increases, has lost the price war. The pollsters do not say so, but we believe that the loss by Saïed and Bouden, of 3 points in the satisfaction rate as to their respective performance, is not unrelated to this loss of the price war.