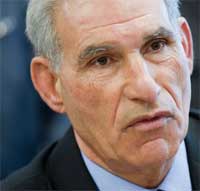 Economic expert and former Finance Minister Houcine Dimassi gave Africanmanager an exclusive interview in which he said that the national bond decided by the government will succeed only if Tunisians renew confidence in political and trade union actors.

He rejected the wage increases called on by the Tunisian General Labor Union (UGTT), noting that if these increases would take place, it would be a blow to our economy.

The former finance minister acknowledged, moreover, that Tunisia lacks policies and strategies in all areas.

Are you for a national bond?

Yes, because this national bond allows us to minimize the use of external borrowing.

However, resources from the loan should be allocated to public investment and not consumption (higher wages, unnecessary recruitment in the public service, and additional compensation expense).

This loan can only succeed if the people still have confidence in political and trade union actors. It should be noted also that this loan could cause a liquidity crunch in the domestic financial market, and at this at the expense of private investors.

While the country sinks into debt, the UGTT continues to call for wage increases, what do you think?

If these increases would take place, it will be a blow for our economy and hence for our country. Do not forget that the pitiful state currently affecting our economy has resulted not only from its poor growth but also and especially from crazy wage increases as well as sterile recruitment in the public service and public corporations.

During the three post-revolution years 2011-2013, the operating expenses of the state budget soared by about 8 billion dinars, or 80%, while during the same period, the growth of our GDP at current prices has not exceeded 20%.

Under these conditions, new wage increases could only lead to the stifling of public finances and the ruin of public economic enterprises. So, say goodbye to Tunisia. Ennahdha and UGTT would then make a “feast” of this debacle.

Some experts argue that if the government wanted to freeze salaries and recruitment, it should not have approved increases like those planned in the transport sector, what do you think?

Yes, that’s quite right, because the worst in the management of a country is to promise things and do the opposite. In fact, in all areas, our country lacks policies and strategies. Accordingly, we wade through the mud in the name of democracy and freedom.

A debt ratio of 50%, what does this figure mean?

This means that half of our GDP is pledged to qualify for loans. In fact, the real tragedy is not the importance of the debt ratio but rather the allocation of loans to consumer spending. Unfortunately, this is what happened during the last three years.

Tunisia: private investment in agriculture up 18.8%