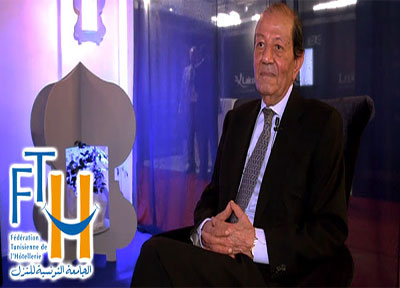 In an interview with AfricanManager, President of the Tunisian Hotel Trade Federation (FTH), Radhouane Ben Salah, said the measures taken in the supplementary finance law 2015 for hoteliers must be subject to an application circular from the Central Bank in order to solve the thorny problem of debt.

Similarly, and to overcome the crisis, hoteliers will embark on the creation of tourist residences.

Could you tell us about the situation of the sector?

An increase of 2.2% was recorded in terms of arrivals and 7.9% in terms of overnight stays until October 10, in comparison with the same period in 2015.

Compared to 2014, the numbers are unfortunately negative. For, entries fell by 30% and overnight stays also dropped by 38.7%.

This is reasonable given that 2015 was considered the worst ever year for Tunisian tourism.

And 2016 could have been much worse if the actors involved had not made a consistent and serious work by focusing on three key markets. There is the Russian market, which experienced a considerable evolution. Figure in support, 515 thousand Russians visited Tunisia until October 10 against 52,000 in 2015 and forecasts indicate an increase in that figure to 636,000 at the end of 2016.

Have you set a strategy to consolidate these markets?

These markets, regarded as promising markets, must be subject of a particular strategy. Similarly, greater effort must be made to restore the confidence of foreign partners through intensive advertising and promotional campaigns, familiarization trips, participation in international fairs.

This is important in order to maintain the pace of growth in these markets, which will in my opinion, impact positively on our tourism industry.

Similarly, it was decided to strengthen support to operators operating charter flights and inviting foreign personalities, travel agencies and journalists for the promotion of Tunisian tourism.

Is there anything new about the UK market, especially as Britain has refused to review its travel advice to Tunisia?

The situation of the UK market is catastrophic. The downtrend rose to 93% from the previous year. This makes sense, especially that tour operators still shun the country because of the travel restrictions that are still maintained and remain a real dilemma for tourism professionals.

However, efforts are multiplied for the decision to be revised as soon as possible.

But one of the major operators, Thomas Cook, has dropped Tunisia from its summer 2017 program. Is it a blow to the sector?

This is very bad news. This will certainly have impact on direct achievements of this market, but it will also have a psychological impact on other European markets.

Despite this decision, a modest upturn is noted in other markets such as the German market and that of Belgium for next summer.

In the same vein, Eastern European countries will progress, not to mention some new markets like China and India.

What are your estimates over the next year?

Overall, 2017 will be the year of recovery, but it will not reach larger numbers.

Therefore, a development program of the Tunisian market (2015-2020) was developed whose first foundations will reaffirm the goal of 10.3 million tourists with 50 million overnight stays and revenue 7,000 million dinars.

Will the achievement of this goal be possible in such situation, deemed morose?

The new strategy focuses on specific points. These including solving problems of the hotel trade which more than ever needs a restructuring and an appropriate solution to its debt.

The outlines of this solution are established by the 2015 supplementary budget law. This law has provided for an assistance program for tourist and craft institutions, which were integrated into the overall restructuring scheme including renewal investment and a rescheduling plan of the loans they obtained.

This program needs an implementation circular from the Central Bank on which we are working to obtain foreign credit lines at attractive rates and substantial repayment length, which will subsequently be made available to the hotel trade.

This debt solution, it should be recalled, relates to 80% of the Tunisian hotel trade. The amount is staggering 4000 million dinars in 2013.

The restructuring is not only debt solution. We also need an upgrade program of our hotel product, on the human, commercial and management level. As such, a report will be drawn up by independent experts to implement an upgrade program to be financed within the unit debt.

From that moment, we will also work on improving quality by implementing a new training program for all professionals and introducing new hotel trades.

Improving the quality of the tourist product also depends on the diversification of accommodation in order to give a positive image of the great potential of Tunisia.

This is crucial, especially as the crisis in this sector has shown the fragility of the Tunisian tourist product, based on almost a single product: the seaside tourism.

We have not stopped talking about the restructuring of the tourism sector and improving services in hotels, but really nothing has changed. What do you think?

The political situation has impacted the sector. Indeed, the ministry has experienced the largest number of changes, i.e. more than 7 ministers since the revolution.

An international meeting is scheduled in Tunis from November 29 to 30, 2016: International conference on investment. How could FTH benefit from this kind of event?

This is a major event, especially since we had better develop a large number of small and medium enterprises mainly in the field of animation, catering and sport. These investments can be made in the most deprived areas which do not receive tourists, but occasional customers.

Beyond this, we will also engage in the creation of tourist residences. This is important, especially with the publication of the decree-law on this segment. According to this text, hoteliers having free land are allowed to build tourist residences that will be subsequently put for sale (50% for foreigners and 50% for Tunisians).

These investments are significant for hoteliers to be able to repay their debts from banks.

Which role could be played by international hotel chains that have moved or intend to do set up in Tunisia, to help resolve the current crisis of the hotel trade?

Installation of international chains is very important in improving the quality of services, but also to improve the image of our country. This can only be beneficial for Tunisia.