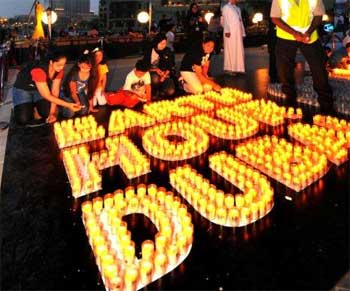 Emirates Wildlife Society, in association with WWF, has urged UAE residents and organisations to unite in positive action for our planet during the coming Earth Hour.

Alongside the traditional call to turn off the lights for one hour at 8.30pm on March 29, UAE residents are being urged to join this global environmental movement by switching to energy efficient lighting.

Ida Tillisch, director general of EWS-WWF, said: “By getting enlightened on the topic and making the switch to energy efficient lighting it has been conservatively calculated by the Ecological Footprint Initiative, that the UAE can collectively reduce its carbon emissions by 940,000 tonnes. This is the equivalent of removing 165,000 cars from the roads every single year.

“These figures speak for themselves. That is why we are asking every company and organisation, every community and every individual in the country to make the switch to energy efficient lighting so that together we can make a positive contribution for our planet.”

Alongside the environmental benefits, it has been estimated that by making the switch, the UAE can save Dh 668 million per year; with an average villa in Dubai saving up to Dh2,315 annually on electricity bills. There are many bulbs now available in the UAE marketplace in a range of colour temperatures to suit the ambiance of your home and workplace, it said.

Earth Hour is the world’s largest grass-roots environmental movement towards action on climate change. 2013 saw all major cities from the emirates plunge into darkness to join more than 150 countries around the world making it the largest ever participation during the history of Earth Hour.

Encouraging UAE residents to make Earth Hour 2014 bigger and better than before, Ida Tillisch continued: “Get involved! There are a number of confirmed Earth Hour events happening around the emirates and landmark switch offs too, so now is the opportunity to make that hour count and make a commitment beyond the hour by switching off and switching to energy efficient lighting.”

Tunisia: number of visitors increases by more than 50,000 in May