Three questions to the EU ambassador in Tunisia, Laura Baeza 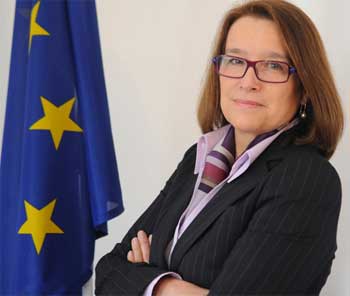 Strengthening governance and civil society and supporting socio-economic development are the main priorities of cooperation between the EU and Tunisia.

Cooperation between the European Union and Tunisia over the coming years will aim to support socio-economic reforms, to ensure more balanced development in the different regions of the country and to strengthen both governance and civil society, says the Head of the EU Delegation to Tunisia, Laura Baeza, in an interview with the EU Neighbourhood Info Centre.

The interview is part of the series Three Questions to the Ambassador produced by the Info Centre.

What are the three main priority areas of cooperation in your country in the new programming period 2014-2020?

In Tunisia, the programming period will be divided into two stages: 2014-2015 and 2016-2020. This will enable us to align our cooperation with the priorities determined by the government in power after the autumn 2014 elections.

In 2014-2015, our cooperation will focus on supporting socio-economic reforms, ensuring more balanced development of the territory and strengthening governance as well as civil society.

The European Neighborhood Instrument (ENI) will make funding faster and more flexible, allowing for incentives for best performers. What does this mean for your country?

The day after the revolution in January 2011, the EU practically doubled its aid to Tunisia. It was the first beneficiary of the SPRING instrument, created in response to the Arab Spring to encourage countries to immediately pursue the path of democratic transition. Support has also been provided in the form of loans from the European Investment Bank for an amount of €300 million per year. In addition, the EU will provide a macro-financial assistance of €300 million at the end of next spring.

To understand the magnitude of the support offered, the grants and loans represent about one third of the budget deficit of the Tunisian state. This is quite significant external assistance for a middle-income country such as Tunisia. It is therefore crucial to support the country with a much faster and more flexible funding mechanism like the ENI. It is also important to have incentives in place so that Tunisia continues on its route of political, economic and social reforms.

Considerable efforts have already been made by Tunisia, like the adoption of the new constitution on 27 January 2014. More efforts will undoubtedly follow.

If you had to mention only three concrete examples of successful cooperation in your country which would they be?

I would most definitely include support for civil society! Prior to the revolution, the Delegation was obviously in constant dialogue with human rights organisations. But we were not in a position to provide them with financial support in view of the restrictions imposed under the Ben Ali regime. The situation changed completely after the revolution. There are currently 54 projects in progress, costing €16 million. In addition, a specific €7 million project is being implemented which aims to bring civil society and public bodies closer together throughout Tunisia, thanks to six regional offices which have been set up. This Civil Society Support Programme (CSSP) is unique in the region and also represents significant progress in the nature of our exchanges with Tunisia and its civil society. Today, after lots of effort, the CSSP is an excellent example of partnership based on an original institutional structure which brings together the state institutions, Tunisian civil society and the European Union, in its capacity as a technical and financial partner, on an equal footing. The CSSP’s field offices will not only strengthen the capabilities of the organisations of Tunisian civil society and the public agencies, but will above all provide support in the identification of the issues and needs of their regions, as well as with the analysis and definition of joint strategies and actions to tackle them. This initiative will prove even more effective as the principle of decentralisation has been enshrined in the new constitution.

Staying in the field of governance, the European Union also provided the Tunisian authorities with support in organising the first democratic elections in its history in autumn 2011. This support has been continued with assistance for the National Constitutional Assembly, which has just begun its activities after over two years of discussions. Tunisia has once again demonstrated its determination to pursue the path of democracy, fundamental freedoms and the equality of all of its citizens, which are now guaranteed by constitutional law. The European Union is of course willing to make all of its expertise available to the Higher Independent Electoral Authority at the next elections.

Another major success in our cooperation is support of microfinance. The Tunisian regulatory framework was established thanks to our support. Having completed this step, we are now assisting the new players to develop a system of microcredit, which will allow thousands of jobs to be created in the most disadvantaged regions. This is particularly important in light of the current economic climate in Tunisia.

Other programmes also aim to foster inclusive growth. In particular, the renovation of working-class districts comes to mind. Tunisia has around 1,400 working-class districts in its cities. They have developed spontaneously, mainly around the large coastal cities. These areas often house families, originally from the hinterland, that have come to the large urban centres to seek employment. This phenomenon is a direct result of the social and economic disparity that exists between the coastal areas and the hinterland.

The EU contribution to the funding of the Priority Programme for the Integration of Working-class Districts in Tunisia is enabling the Urban Redevelopment Agency, which comes under the Ministry of Infrastructure, Spatial Planning and Sustainable Development in Tunisia, to construct roads and provide sanitation and lighting systems in 119 districts. This will improve living conditions for 700,000 people. This programme will also enable the development of zones focussing on revenue-generating economic activities, as well as on socio-cultural and sporting facilities for the benefit of young people in particular. Another original aspect of this programme is the fact that some of the people employed on the building sites for the renovation projects live in these districts. This is another targeted way of integrating hundreds of people into the employment market.