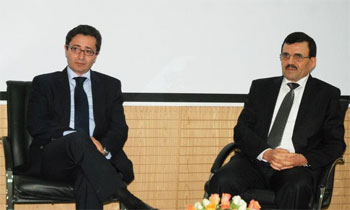 The bell rang, on Thursday, April 4, 2013, to announce the start of trading of Age-Tech, which has joined the Alternative Investment Market of the Stock Exchange.

It was in the presence of Prime Minister Ali Laârayedh who was surrounded by Selim Besbes, advisor to the Prime Minister, Minister for Economic Affairs, Ridha Saidi and of course the President of the Tunis Stock Exchange, Fadhel Abdelkefi. The company (Ae-Tech) has a market capitalization of 13,340,004 dinars. It has based the transaction on a price offer to the public to the tune of 583,334 new shares through a capital increase in cash, and this through a public offering. The amount of the transaction amounts to 3,500,004 dinars, representing 26.24% of the capital. As to the price of the offer, it is set at 6 dinars.

The Prime Minister, who came to officially open the new headquarters of the TSE, said that the progress made by the financial market can not hide its low contribution to financing private investment, whose share has not exceeded 11% in 2010 and 6% in 2012.

He also said that the current financial market indicators do not reflect the reality of the effort and the ability to mobilize the necessary funding to improve the profitability of several companies, both private and public, and expand their activities nationally and internationally. Indeed, the year 2013 started off well with two listing on the stock market, those of Land’or and AeTech which have mobilized on the market 10.92 MTD and 3.5 MTD, respectively, and attracted each about 21,000 subscribers, the Stock Exchange said in a recent report. For its part, New Body Line will launch from April 8 subscriptions to its offer of shares involving 1,575,000 shares to raise 13.57 MTD on the market. The other five companies will finalize their stock market listing after winning approval from the Financial Market Council.

Moreover, it should be noted that during the months of February and March 2013, the Board of Directors of the Exchange has agreed in principle to the admission to the main market of One Tech Group, operating in the cable industry and mechatronics in Tunisia and Hannibal Lease. The report adds that the pace of new entries has accelerated from the last quarter of 2012 and is expected to break all records in 2013, reaching 75 listed companies at the end of December 2013.

In 2012, a strong enthusiasm for the IPO has been noted, especially in the last quarter of 2012. The alternative market has attracted six entries against 2 for the main market. Overall, the Board of Directors of the Exchange has agreed to eight new businesses in 2012. Regarding to the benchmark of the Exchange, the TUNIDEX declined from 7.63% in 2011, against an increase of 19.13% in 2010. Affected by the continuing instability of the business environment and the lack of visibility, Tunindex ended the year 2012 on a market decline of lesser importance, only 3% despite the growth of revenue of listed companies, while exchange-traded funds posted an increase of 24% compared to 2011 and reached 2,077 MTD. However, the rates trend was reversed during the first quarter 2013 as the Tunindex grew 3.2% despite the sharp drop of 3.69% recorded February 6, on the date of the assassination of Chokri Belaid, reminiscent of the declines recorded on January 11, 12 and 13, 2011.