Tunisia: White Paper first 100 days of Jomaa. It washes cleaner than clean any hope for quick recovery of the economy! 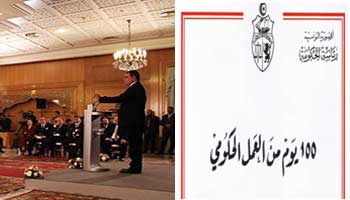 Ultimately, it is better to improvise, even from notes. Disappointment would have been greater if the Prime Minister had read the 29 pages that had been prepared for journalists at a press conference broadcast live, as the document was full of what might appear as a mere bluster.

In his improvisation exercise, Jomaa somewhat saved the day by a few bits of information, given in his efforts to successfully carry out his primary mission: leading Tunisia to the next election.

A veritable “white paper,” this document, proudly recounts the 119 achievements in all sectors of the life of a government, in only the first 100 days of Mehdi Jomaa’s government.

Let’s just take, for example, “the major achievements over the past 100 days” in the field of monitoring of economic affairs, as reported in the document of the Prime Ministry. They can be summarized in one page and five measures. None of these five measures are talking about a project or a practical and strategic decision. Judge for yourself: “Establishment of the government program and creation of a Task Force,” “creation of a joint committee …”

“Setting a direction (…), preparing a map of reforms (…), establishment of a structure entrusted with study (…) establishment of a ministerial monitoring working group (…) and monitoring of major projects. ” Those who see, not like us, the trace of an action, a concrete initiative or a decision of an economic nature, assign the blame on us.

A bit, a bit more concrete could be the record of 100 days of Minister of Economy and Finance, Hakim Hammouda. “The presentation [note: in June ] of the supplementary Finance Act to the NCA [note: until it will be adopted, the chicken could have teeth ] with no further detail in the document, the 10% decrease of management expenses in the state budget (note: DT 1.7 billion if we know that the overall management expenses for 2014 are 17,750 MTD and without knowing if Marzouki will follow suit and what else , apart from petrol coupons and company cars where the saving is almost laughable ), 100 MTD for distressed companies and 30 MTD for the creation of personal projects ” and again the brevity of a “creation of a working group tasked with regional investment and the development of a set of measures to boost the financial market .”

Here again, we may stress the long period that this could take while everyone is talking only about elections which no one yet knows the exact date.

Finally, the Ministry of Economy and Finance announces “developing a strategic vision of recovery in the banking sector, accelerating the revision of the tax system and starting work on the project of a new economic vision.”

It should be noted, rightly, that this is the first version and may not even be, but a strategic vision. This means that measures must be sufficiently long-term, and we hope not, perhaps even in very long term. This is not pessimism, but insight and realism. Indeed, until this would have a concrete meaning and be translated into tangible measures and manage to win the consensus of all economic, political and union parties, there will be serious chances for the chicken to have teeth.

However, what needs to considered is this certainty that emerges from both the speech of the Prime Minister and his “white paper that it is unnecessary to respond to a sharply deteriorated economic and especially financial situation of the country. Mehdi Jomaa has finally understood that he could get out of this rut only through strategic and structural reforms.

That is why he speaks, without omitting to mention the sprinkling of a few millions DT (130 MTD for companies in difficulty and personal projects), of a strategic vision for the role of banks , tax reform and ultimately a new growth model as said more directly by the prime minister during his press conference.

All this leads irrevocably to say that the 100 days of Mehdi Jomaa at the head of the 5th Government of the Tunisian transition, simply served to him to take stock of the situation and imagine possible approaches to get out of the crisis. However, he cannot bring into effect these approaches without the approval at least of the Quartet and then the NCA, hence the importance of the National Economic Dialogue.

All this brings us back to say that the fast recovery of the Tunisian economy is not for the months to come. The light content of the “White Paper” 100 days of Mehdi Jomaa in the Kasbah almost confirms it. The major handicap of Jomaa, who knows them only too well, is the refusal of work by many of the people he governs, their disastrous productivity and their incessant demand for redistribution of the wealth they have stopped creating since their Revolution!

US Millennium Challenge Compact for Senegal among world’s largest – Clinton