Tunisia: after supporting Mehdi Jomaa, the employers organization sets a course to follow! 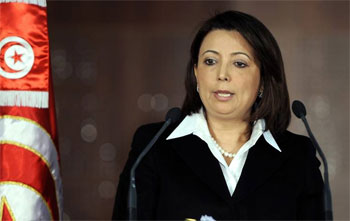 After pledging full support for the candidacy of Mehdi Jomaa for Prime Minister, President of the Tunisian Union of Industry, Trade and Handicrafts (UTICA), Wided Bouchamaoui sets a course to follow that the employers’ organization considers necessary and a priority for the next ministerial team.

A week after the official appointment of Mehdi Jomaa, and while he is working to form his cabinet, Wided Bouchamaoui announces a roadmap that the new tenant of the Kasbah should implement.

At a press conference held Thursday, January 16, 2014, the President of the employers’ organization made an outline of the economic program crafted by the UTICA.

A program that incorporates the recurring demands and positions of employers already repeatedly expressed. “We must ensure the neutrality of the administration and the neutralization of mosques! There needs to be much more security and stability, provide major financial and fiscal sustainability, fight against the informal sector, reduce customs tariffs, improve the purchasing power of Tunisians, find solutions to soaring prices , reduce taxes on exporters and develop disadvantaged regions.” These are, according to the UTICA, priorities for the next period.

Wided Bouchamaoui, however, recognizes the seriousness of the economic and social situation, stressing that the next government will not have the magic wand to make everything expected from it, but, she adds, it should at least prepare a fertile ground for appropriate action.

She painted a bleak picture of the Tunisian economy, announcing that 2014 will be a very difficult year for the country and we should not expect more than 2.6 % growth during the year, as expected by the Bank World: “We must not delude ourselves! We are at mid-January and we still do not have a government or a supplementary finance law or a date for the next elections,” she said.

According to Wided Bouchamaoui, the informal sector accounts for 52 % of the national market, calling on the government to strengthen the control of borders with Algeria and Libya, and to address the major sources of traffic before focusing on street vendors who often suffer unemployment, according to her. To reduce the tax burden and others afflicting the formal sector and negotiate the reintegration of the informal sector in the economic machine, Bouchamaoui also called to reduce tariffs on certain products, especially staples.

She said, in this regard, that the annual losses of the Port of Rades amounted to 80 million dinars due to disruptions and slow formalities relating to goods, saying it has always called for the extension of this port, but to no avail.

Following the crisis in Europe, the President of the Utica called on businessmen to target new markets, such as those in Africa, “2014 will be the year of Africa,” she said, adding that several Tunisian companies have already achieved much success on the continent. She added that several Tunisian operators have expressed interest to settle in Africa especially in the areas of insurance, leasing or land and sea transport.

She further stated that Tunisia is lagging behind in the conquest of the African market in comparison with Morocco which has been present in Africa for a long time, also calling on Tunisia to increase exchanges with the Maghreb markets, but without forgetting its relations with the European Union that should not be placed under the banner of ” Low cost” while respecting international standards.

‘Nigeria imports 150b naira worth of ICT software annually’