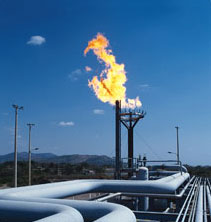 A Cabinet meeting held Wednesday in Kasbah under the chairmanship of Interim Prime Minister Mehdi Jomaa, approved the “South Gas” project, despite the country’s economic and financial difficulties.

Government spokesman Nidhal Ouerfelli said this project will certainly help boost the development process in the region, according to a Prime Ministry press release.

The project provides for the creation of two natural gas units in Gabes and Tataouine and a gas pipeline between Kamou and Tataouine, noted Mr. Ouerfelli.

Another natural gas unit with a capacity of 600 cubic metres will also be set up in Tataouine, along with a gas bottling plant to generate between 80 and 100 permanent jobs, according to the press release.

Ouerfelli added that other projects under study will enter into service soon in the governorate of Tataouine.

They involve the sectors of agriculture, industry, tourism and vocational training.

Ouerfelli said this regulatory framework comes to realise the development goals, anchor the principles of good governance and establish the foundations of sustainable development, particularly regarding simplifying procedures to accelerate the implementation of planned projects.

Measures will be taken for this purpose, including particularly putting the system of public procurement online and adopting intangible procedures as part of the “TUNEPS,” involving all representatives and stakeholders in work of the national board of public sales and demands in order strengthen partnership between the state and different stakeholders in the sector and implement decentralisation.

Measures also include holding a periodic meeting under the chairmanship of the Secretary General of the Government and the Director General in charge of Procurement Market.