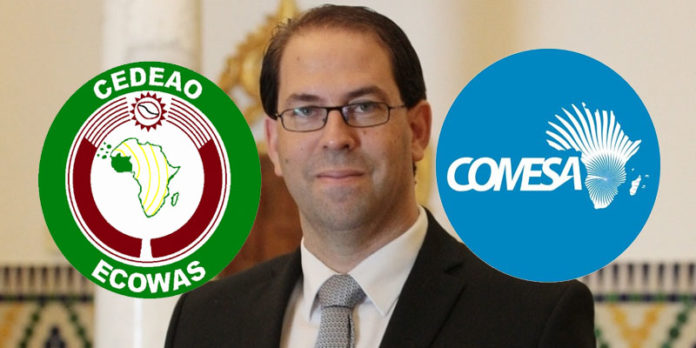 It’s a fact: Tunisia is lagging behind in Africa compared to a competition that has been raging all over the place for decades.

This situation, very detrimental in many ways, the Tunisians owe it to their first president, Habib Bourguiba, certainly visionary, again in many ways, who undoubtedly loved Africa, its leaders, but had an almost virtual relationship with his continent.

Then came Ben Ali, who was afraid to venture there. He was afraid of everything else. Tunisia is also paying the price of its stubbornness to maintain the chimera of a Euro-Mediterranean Union, ostensibly side-stepping Africa and its opportunities, its solid growth – the second highest in the world after Asia – its infinite constructions sites etc. The Euro-Mediterranean Union never came, mainly because of the reluctance and procrastination of the Europeans.

The terrorist threat that took root in the Maghreb sounded the death knell of a stillborn project. And it is only now that Tunisia is looking towards its natural extension: Africa. A bit late!

Meanwhile the competitors, more and more numerous, have taken to the continent. Tunis is doing what it can to catch up. We have been announced a move to join COMESA (“Common Market for Eastern and Southern Africa”, composed of 19 countries) for the beginning of 2018.

Tunisia has also knocked on the door of ECOWAS (Economic Community of West African States), an organization of 15 nations among which the continent’s largest economy, Nigeria).

The will is there, undeniably, but does the country have the means of its ambitions? That’s a lot less certain.

The Tunisian government has had the bad idea not to further muscle the budget of its diplomacy for 2018, a situation of which Minister of Foreign Affairs, Khemaies Jhinaoui has indeed complained.

That decision is fraught with consequences, when we know that diplomacy has emerged as the arm of the economy.

Doomed to play the extras?

Tunisia, whose representations in Africa and Asia are meager, could be forced to continue to be an extra in the scene, merely taking advantage of international meetings to glean some contracts, contacts or vague promises.

This is indeed done by President Beji Caïd Essebsi, in Abidjan, Côte d’Ivoire, on the sidelines of the African Union-European Union Summit, on November 29 and 30, 2017.

His charm offensive was well received by Ivorian President Alassane Ouattara, it is said. It is always good to take in a country whose growth rate is often close to double digits in recent years, the locomotive of the UEMOA zone (West Africa Economic and Monetary Union, grouping 8 states) and which has well filled coffers (with cocoa and coffee and the almost unlimited trust of donors).

But here, there is the competition nearby, and that does not let go: China, Turkey, France, Morocco … Besides, King Mohammed VI landed in Abidjan three days before the AU-EU Summit, and it is certainly not for a simple visit of courtesy or to bring flowers to Mrs. Ouattara! The King is undoubtedly very friendly, affable and sincerely loves this continent, its cultures, and Africa loves him back.

But we know above all his formidable efficiency when it comes to winning contracts. Tunisia is far from being able to say as much.

Tunisian Prime Minister Youssef Chahed made a trip (in Sudan in March 2017) and a tour in Africa (Niger, Burkina Faso and Mali, in April of the same year).

The worry is that these are his first and only visits. Observers, both in Tunis and on the other side of the continent, had warmly welcomed this trip, expecting other trips. But nothing ever since. Not even a snippet of announcement or program to the continent.

Touring the backwoods of Tunisia, as he did to Kairouan, it is well, no one will dispute it, but acting on the continent, which attracts Italy, Germany, Japan, South Korea, etc., it’s even better! It is in Africa that things are happening now.

Tunisia has understood this, but it is struggling to get in the way of the decisions and actions that are needed. Yet it’s very simple: Just watch the competition and do exactly the same. While Tunisia is lagging behind, there is food and drink in Africa for all guests…

Businessmen do not wait for diplomacy

Tunisian economic operators are busy and, fortunately, do not wait for diplomacy. TABC (Tunisia-Africa Business Council) is forced to steer its ship alone and even bring in its wake the Tunisian authorities, a stooge that has its weight of gold from African governments, very sensitive, sometimes a little too much, to the official decorum.

The UTICA (Tunisian Confederation of Industry, Trade and Handicrafts) was at the Abidjan Summit to fiddle with the French and African employers.

And the CONECT (Confederation of Tunisian Citizen Enterprises) went there on its own initiative by heading for Senegal, a country in a beautiful growth dynamic and about which the IMF and the World Bank say the greatest good.

And for good reason: It is a stable nation, at all levels, whose economy is supported by the PSE (Plan Senegal Emergent), an ambitious program, unprecedented, focused on 8 major projects financed until 2035.

This is added to the windfall of gas and oil that will change the face of the country from 2020.

For Tunisia, which has solid expertise and offers in many industrial segments, and even better than the Moroccan rival, Senegal is an excellent point of fall.

At the latest news, the landing of Tunisian businessmen has been very well received by the Senegalese employers’ organizations.

This is how the Tunisian economy will, a little bit, shine on the continent and not wait for an amorphous diplomacy and that obviously will be out of hand for a long time, for lack of resources especially.

And even once in COMESA and ECOWAS, the elimination of customs barriers and the free movement of goods and people will not make contracts and partnerships fall from the sky, we will have to go and get them.

And this is precisely the role, among others, of diplomats in modern times.

For Tunisia a densification of embassies and consulates on the continent is a pressing need. Otherwise COMESA and ECOWAS, even with their markets of hundreds of millions of consumers and their innumerable niches, will remain empty shells

Tunisia: industrial production edges down 3.1% in 2019

Tunisia: British Council to organize ”English language Week” from May 26...