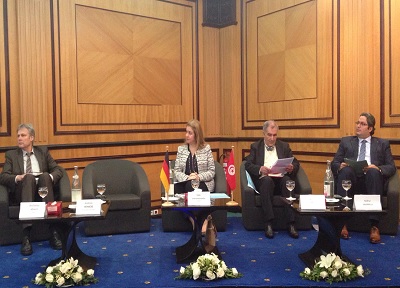 The sixth Tunisian Energy Day was held Wednesday December 14, 2016 in Tunis within the framework of the Tunisian-German energy partnership under the theme “The second phase of the energy transition”.

It is a multidimensional cooperation, especially as Germany is preparing to provide its support for Tunisia’s electrical interconnection with Europe, said Minister of Mining and Energy, Héla Cheikhrouhou.

In her remarks, she placed emphasis on this structuring project allowing to avoid certain costly investments in the new generations, but also to maximize Tunisia’s energy efficiency.

This step is important, says the minister, as the energy transition is not only a challenge to produce electricity at the lowest cost, but also to guarantee sustainable electricity that will take into account another commitment, the creation Jobs and wealth, according to her words.

But how to achieve this balance? According to the minister, the large-scale introduction of electricity- generation through renewable energy will be achieved through two types of projects. “Projects that continue to be implemented by the STEG to the tune of 350 megawatt and 600 megawatt produced by the private sector,” she said.

This opinion is shared by the former minister to the Prime Minister in charge of coordination and economic affairs, Nidhal Ouerfelli, who pointed out that energy transition is a determining factor for economic transition.

“This transition will play a strategic role in meeting the new post-revolutionary needs of Tunisian citizens, namely the sustainable improvement of the quality of life, job creation and the development of the least advantaged regions, he argued.

For Ouerfelli, the achievement of this objective will involve the transformation of the energy system on the basis of two priority actions: the reinforcement of energy efficiency and the use of renewable energies.

To achieve this, this transition is called to be collectively constructed, involving all the stakeholders and consolidating real cooperation with the partners.

A transition supported by Germany

This challenge seems easy to achieve, especially as Germany is getting involved in the second phase of the Energy Transition after the one consisting in ensuring technological development by massive deployment through the purchase price.

At this level, Germany is ready to accompany Tunisia in this process and to support it on this path thanks to a proven expertise, announced Andreas Reinicke, ambassador of the Federal Republic of Germany.

For the diplomat, this is a crucial step for a country that has enormous potential but still faces with an urgent need to further develop renewable energies.

“Germany is now entering the second phase of the Energy Transition: the main challenge in this stage is the integration of renewable energies into the system and the market and for this reason, Energy represents one of the main axes of our cooperation aimed at the development of the solar market in Tunisia, “said the ambassador.

Sudan, US clash over visa for President Al-Bashir

Tunisia: reported jobs in services down