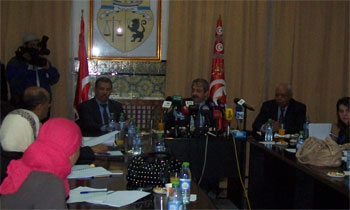 Efforts are currently underway to establish a job-loss insurance system. This was announced by Khalil Zaouia, Minister of Social Affairs who said that it is an independent fund that will cover workers dismissed for economic and technical reasons or for permanent closure of the company.

At a press briefing held Thursday April 25, the Minister noted that this system is one of the central themes of the social contract signed in January between the social partners.

The contract, whose implementation has already started, relates primarily to the institutionalization of social dialogue. Khalil Zaouia said in this respect that emphasis will be placed on the creation of a national council of social dialogue enjoying administrative and financial autonomy and whose composition is tripartite equally between the signatories of the contract.

It is time to neutralize social promotion structures

Involved for many years in politics, social promotion structures are called today to show more neutrality especially in relations with political players.

Khalil Zaouia noted that the circular N°6 plays an important role in ensuring the supremacy of the law and essentially neutrality of the administration. This will help overcome the problems faced in the issue of welfare recipients. “To ensure greater transparency, more efforts are made to identify welfare recipients,” said the minister, adding that “a census will be carried out soon, for two years, to know the exact number of recipients.”

With regard to associations for the disabled, the Minister noted that the situation of 3,500 employees of these organizations will be regulated according to the sectoral agreement, and this through the repayment of their wages estimated at 57 million dinars.

Specific program for the illiterate

To encourage illiterate people to participate in the upcoming elections, a specific program has been implemented to raise the awareness of that social class on the importance of participation in the democratic process. As a reminder, one million 700 thousand Tunisians had not participated in the 2011 elections.

The program includes a briefcase in two languages and audiovisual materials which are in progress. In this regard, 66 people among teachers and inspectors have been trained to accomplish this mission.

Revision of social security funds system is an obligation

Reviewing the situation of social security funds, Khalil Zaouia said it is essential to revise comprehensively the funds’ systems in the face of their growing deficits.

This issue has raised controversy for years. He referred to the case of CNRPS, in particular, whose deficit reached 166 million dinars in 2012. The important thing, he argued, is to diagnose failures in order to create the appropriate reforms.

Addressing, finally, the celebration of Labor Day on May 1st, he said the best worker prize will be awarded this year to 9 employees in the private sector and 5 in the public service.

The prize of social progress and occupational health and safety will be awarded to three companies, while the prize of advisory committees will reward one company.

Tunisia-new Executive Board of UGTT: Change in the Air!