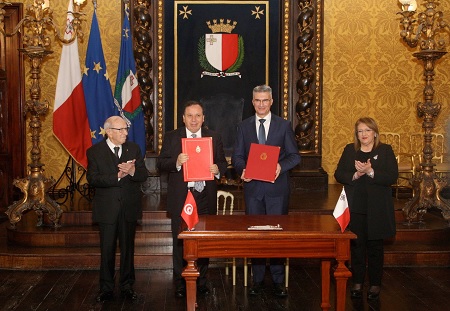 Four cooperation agreements negotiated in the framework of the Tunisian-Maltese joint commission held on Monday at the expert level were signed on Tuesday at a ceremony attended by President Beji Caid Essebsi and his Maltese counterpart, Mrs. Marie-Louise Coleiro Preca.

These agreements, signed by the two foreign ministers, should lay the foundations for a higher level of relations between the two countries, deemed below expectations despite the geographical proximity between Tunisia and Malta and the opportunities offered.

The agreements cover the areas of employment of skilled labor, early childhood, seniors and culture.

These agreements aim to promote cultural exchanges between the two parties and to ensure regular participation in events held in both countries.

They also provide for taking charge of cultural missions, the invitation of Tunisian troops to Malta, the introduction of new cultural disciplines in the fields of visual arts and dance.

In the field of tourism, the agreement includes, in addition to the increase of tourist flows and the promotion of the destination Tunisia, twinning projects between Tunisian and Maltese cities.

Valletta is the European Capital of Culture for 2018 and the activities organized in this context extend to 2009.

One of the agreements also provides for the establishment of a partnership between institutions specializing in the care of the elderly to enable Tunisia to draw on the Maltese experience in this direction.

The fourth agreement provides for the recruitment of Tunisian skilled labor.

Malta needs 40 thousand employees in the next three years, which will facilitate the mobility

Share
Facebook
Twitter
Linkedin
Email
WhatsApp
Viber
Pinterest
ReddIt
Tumblr
Telegram
Digg
Mix
Print
Previous article2019 election year, between the deep-seated fear of Ennahdha and the dangers of the economic crisis
Next articleTunisia: dinar loses over 24% of its value against US dollar (BCT)