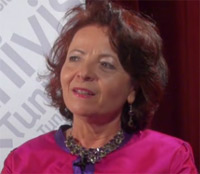 Microfinance in Tunisia, its challenges, and its development prospects were discussed at an interview given to AfricanManager by Assma Ben Hmida, Executive Director of microfinance institution, Enda Inter-Arabe. She also talked about the effects of the Revolution on Enda and foreign donors and spoke of the share of Enda in the 70 million dinars allocated by EIB and IDB to strengthen microfinance in Tunisia. Interview:

How is Enda pioneer in microcredit?

Enda is a very important development player in Tunisia. It was pioneer in introducing in Tunisia since 1995 internationally recognized “good practices” of microfinance. It should be noted that the Tunisian Solidarity Bank (BTS) was established in 1997, the first law on microcredit was enacted in 1999, followed by the creation of microcredit associations, from 2001.

Since the launch of its microcredit program, Enda has granted 1,150.000 microloans worth 784 million dinars; 378,000 micro-entrepreneurs have received at least one loan and some more than 40 successive loans.

Today, Enda has 67 branches, including at least one in each governorate. It employs 1,000 people, more than 80% of whom are university graduates and, in 2011, it hired 200 people at a time when in other sectors unemployment was increasing.

Thirty Five per cent of our portfolio is in rural areas. Indeed, Enda began funding small farmers by providing loans tailored to their repayment capacity and to seasonal agricultural activities, more risky because of climatic hazards and dispersion.

After the Revolution, we launched, with the support of the Swiss Confederation, a new product designed to encourage unemployed youth to start their own business.

Have things really changed after the Revolution?

Of course, the effects of the Tunisian Revolution have involved micro-entrepreneurs. Thirty per cent of our customers have been affected directly or indirectly: looting, theft of livestock, premises torched, markets or sources of supply lost (including Libya), and many other difficulties. Enda kept supporting them, rescheduling or refinancing their loans, in some cases and providing support on our social funds or donations from Tunisians abroad. Certainly, the Revolution has not reduced the financing needs of micro-entrepreneurs, it was quite the reverse.

The good news is that Tunisians, especially women from popular neighborhoods and rural areas want to work and borrow to strengthen their micro-enterprises and improve their living conditions without going through the charity. The repayment culture introduced by Enda in Tunisia since 1995 remains very strong and rooted in the majority of micro-entrepreneurs, despite the difficulties.

The second good news is that women are more active. Seventy per cent of Enda’s clients are women. But Enda is trying to increase the share of men in its portfolio to help them overcome unemployment through self-employment and contribute to the well-being of the family instead of being dependent on women.

What are the effects of the Revolution on foreign donors?

It must be remembered that the impact of the Revolution was very hard for Tunisians: rising unemployment, increasing prices, especially food, general decline in living standards. The Revolution has shown that micro-finance has today a greater role to play. On the second day of the Revolution, our international partners called us and offered to give us support through funding: EIB, IFC, Oikocredit, SIDI / FEFISOL, the Embassy of France, the British Embassy and the Swiss Confederation. We negotiated with the AFD a loan at concessional rate to finance small farmers in disadvantaged regions and a donation from the European Union to introduce new technologies.

Regarding refinancing, we are aware that the deterioration of the country’s economic situation will affect our ability to raise funds for the coming years.

Enda regularly conducts ratings hat are external and objective evaluations of the performance of the institution. Next week, we will do our fifth ratings and we hope that the downgrading of the rating of Tunisia will not influence Enda’s rating.

What are the problems faced by Enda and micro-finance institutions in general?

Today, Enda’s major problem is access to refinancing in order to finance our growth and reach out to the maximum number of poor people. Remember that there are a million Tunisian micro-entrepreneurs who need access to microcredit, only one third of this demand is currently met. This is not a problem of demand or quality of work or products. Enda has already implemented all kinds of products to serve the people with suitable services. In terms of credit, we have the expertise and we can finance not only urban activities but also agriculture, livestock or business creation. But we have no money.

Enda is refinanced by 10 Tunisian banks and four international financial institutions. Large banks are experiencing liquidity problems and tend to put their money, for example, in the consumer credit which is more profitable than Enda which has negotiated very good rates.

As to international donors, we expect shortly relatively large amounts from the EIB, IFC and AFD, and perhaps Citibank. Moreover, the European Bank for Reconstruction and Development (EBRD) may become a sponsor by the end of the year. With regard to international investment funds, some wish to support Enda, but in foreign currency, which requires currency hedging. We are trying to convince the Tunisian banks to give us some priority, given our social vocation.

How do you see the solutions then?

I call on investors to get together and find a mechanism to cover the risk and establish a fund, not necessarily only for Tunisia but for the entire Maghreb or the Mediterranean to refinance microfinance institutions. I do not think it is something impossible. In Morocco, there’s the Fund “Jaida” for refinancing microfinance institutions created by the Moroccan government with the help of international donors, why not such a fund in Tunisia?

We adhere to all initiatives under the new law on micro-finance: credit bureau to avoid over-indebtedness, as well as the observatory of microfinance (which will be financed by the EIB and the Government of Luxembourg and implemented with the support of the NGO Luxembourg ADA), the supervisory authority. We would also like the Ministry of Finance and donors to set up a guarantee fund to enable MFIs to take more risks, including start-ups by young people. Several international institutions like the EU and the EIB will finance programs to strengthen the sector in Tunisia. Hopefully this will make a difference.

The Islamic Development Bank and AFESD have already released about 70 MTD to Tunisia to strengthen microfinance. What was the share of Enda?

Last year after the Revolution, the Ministry of Investment and International Cooperation called on Enda, BFPME and BTS to inform donors of the impact of the revolution on our programs. Enda said the Revolution had hit us hard and we urgently need refinancing to be able to continue supporting micro-entrepreneurs. We were pretty sure to receive this support. However, we learned that the Islamic Bank and Fades have granted Tunisia a loan of 70 million dinars with very flexible terms that have been granted to other state institutions, but nothing to Enda. We do not understand why nothing has been given to Enda which has proved to be an effective development actor, unlike some other institutions which were very expensive to the state. It seems that nothing has changed compared with the past!

What would be the reaction of Enda?

Because of the lack of new resources and with repayment difficulties of some of our customers which are understandable, we have been forced to reduce our growth instead of supporting more people who really need it.

What are the prospects for the development Enda?

A very important avenue is technology to reach more poor people in scattered areas and to reduce the waiting time for micro-entrepreneurs in our agencies. For example, we will equip loan officers with tablets that will enable them to have access to real-time data for each client. They will also allow mini-training for micro-entrepreneurs at home. We will also develop mobile banking (mobile payment). With technology, we can reduce costs, save time and money for customers and better serve remote rural areas.

I visited microfinance institutions in Latin America and sub-Saharan Africa where the use of the technology is already widespread. In this area, Tunisia is very late, in part because of resistance from the authorities which refuse to give their agreement to current technologies that have been proven around the world, for example, in Kenya and Peru. There is also funding for our customers via the Internet through two major online institutions, KIVA in the USA and Babyloan in France. We could attract funding for micro-entrepreneurs by Tunisians living abroad (or Tunisia) and other citizens who wish to contribute to the development of our country through microfinance. But again we expect permissions.

The Ministry of Finance is in full preparation for the establishment of a new legal framework for microfinance in Tunisia, which opportunities can be used?

Under the new law, Enda plans to create a company and transfer its financial activities to that company. To do this, we will need to upgrade to improve our skills and our information system. We seek, for this purpose, support under the form of foreign technical assistance. IFC and EIB have already begun to fund us.

With the change in the law, we hope to introduce savings. Indeed, it has been shown in many countries the poor have as much, if not more, need to be able to entrust their savings to an institution they trust. Unfortunately, the collection of deposits is prohibited by law.

Sometimes it is difficult to understand what motivates the legislature. Contrary to what is believed, opening this possibility to micro-finance institutions would increase the mobilization of savings, because the poor put little savings in the Post and even less in banks.

After this “transformation,” the NGO Enda will remain in place and will provide support activities to micro-entrepreneurs: training, marketing support, circles of information and discussion, financial and citizen education and other activities.

President of Ceto to Africanmanager: ”The season will not be saved...