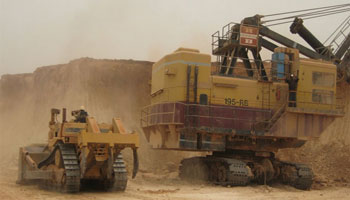 The supply of phosphate to Tunisian Chemical Group (GCT) plants, including Medhilla, Gabes and Sfax is blocked after a new wave of protest by unemployed graduates, especially in various phosphate production sites and distribution channels in Metlaoui, said deputy general manager of the Gafsa Phosphate Company Taieb Yahyaoui.

Protesters among university graduates from the delegation of Metlaoui have staged since Saturday a sit-in in several phosphate production sites and at the railway station in the city center causing a suspension of phosphate transportation through locomotives to chemical fertilisers’ production units in Gabes, Medhilla, Skhira and Sfax.

Head of the production control department at the Gafsa Phosphate Company Hafedh Yahia said the production of the phosphate company has reached 2 million and 386 thousand tons,

from the beginning of January until August 30, 2016, while the company has planned a production of 4 million 331 thousand tons.

He added that the stock of production in GCT plants “is almost exhausted,” especially as no phosphate has been carried to these plants since August 29.

Communiqué of the Peace and Security Council of the African Union...