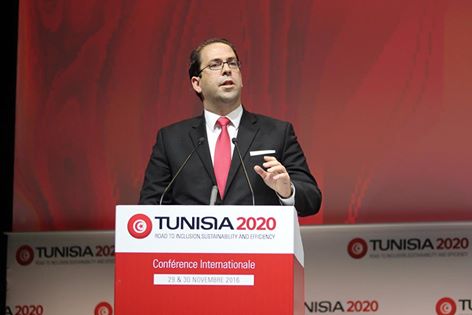 “Investments of around 34 billion dinars were raised at the international investment conference “Tunisia 2020”, Prime Minister Youssef Chahed said at a press conference at the closing of this event held on Wednesday at the Convention Centre in Tunis.

Chahed stressed that these investments are divided between 15 billion dinars, in the form of signed agreements and 19 billion dinars in commitments.

The Prime Minister welcomed the success of the conference, which was attended by political decision-makers and businessmen representing major international companies.

He praised the efforts of President Beji Caïd Essebsi who, he said, prepared the ground for the success of this conference through his various visits to several countries.

The Prime Minister said the success of this international investment conference is a strong message to the international community, meaning that Tunisia has made a successful democratic transition.

“Tunisia is now on the right track and will remain a competitive investment destination,” he said.

The second message conveyed by the Prime Minister on this occasion indicates that “the reforms started by Tunisia in recent years have begun to bear fruit, notably legislative reforms in the economic sector, including the adoption of the new Investment Law, the Law on Public-Private Partnership and the Banking Law “.

At present, it is up to the Tunisians to take advantage of the results of this conference. “We must work hand in hand, so that Tunisia can succeed in its challenge,” he added.

In this context, he called on all Tunisians to restore the value of work, saying it is only with will and work that we can succeed in our commitments and create wealth and jobs.

“The real work begins today. It is not enough to sign agreements or contracts, but we must accelerate the process so that these projects see the light of the day and these promises become a reality, “he said, promising that” the future will be better for Tunisia”.