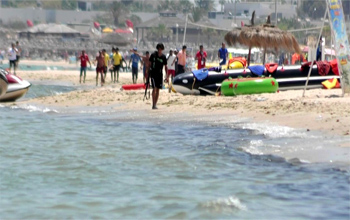 Tongues are starting to untie nearly six months after the attack on the Imperial Hotel in Sousse that left 39 dead, including 30 Britons, denouncing a series of deficiencies that would have been committed by security forces in charge of maintaining order in the tourist resort of ​​El Kantaoui.
The investigating judge assigned to the case has issued a detention warrant against the head of tourism security in Sousse and ordered to remand 5 other officers of the same security brigade in custody, the spokesman for the Court of First Instance in Tunis and the Judicial anti-Terrorism Centre said last Friday.
The investigating judge has gathered enough evidence to charge to issue warrants thereto, having available, according to security and judicial sources quoted by the daily Assabah, a set of physical evidence and presumptions establishing that the attack was carefully prepared with logistical support, identifying sites and supplying weapons of crime, to which were added, to make the terrorist attack possible, the negligence, nonchalance and even a certain spinelessness shown by security officers (police and national guards).
In his investigations, the judge placed great emphasis on the CCTV camera installed in front of the offices of the National Security District in Sousse North, which has territorial jurisdiction, as well as phone records of the same district’s operating room having established that a patrol of the tourism security Brigade was in the area of ​​El Kantaoui just when it received a call from the operations room, specifically at 12:45 ordering it to go full speed to the Imperial Hotel where the attack was carried out.
Instead, members of the patrol returned to the premises of the district to join the operations room and then back down to their vehicle, opened the trunk to lay their body armors before wearing them again and withdrawing the magazines of their weapons type “Steyer” and reassembling them without cause and deciding between 11 and 13 minutes later to join the scene of the attack, a big waste of time, said Assabah.
According to the data collected, only one officer of that patrol was involved alongside a National Guard commander, the former head of the security of district and the former district chief of the National Guard in the shooting on the attacker.
In addition, the district chief of National Security in North-Sousse arrived on the scene armed with a pistol, accompanied with three officers armed with “Steyer” without getting involved in the fire-fight with the terrorist or even trying to distract him and divert his attention.
This was also the case of the two Sousse coast-guards who were at the time of the attack in front of the Imperial Hotel and who had not intervened with the speed and efficiency required although they were armed with “Steyer.”
The two guards were aboard a Zodiac speed boat ten meters of land, but did not intervene immediately although the terrorist is within reach after the latter arrived at the beach, laid his bag in the sand and extracted his weapon of war from his sunshade to shoot at dozens of tourists.
Following the distress call issued by some citizens, a member of the Coast-Guard armed with a “Steyer” tried to leave the boat, but lost his balance and fell into the water.
Meanwhile, a young Tunisian, former soldier, snatched his gun, loaded it, and headed to the hotel pool; he only succeeded in firing a single shot, the weapon being suddenly halted, preventing him from going after the terrorist who threw a sound bomb in his direction. After which, the young man returned to the beach and handed the weapon to the officer of the coast guard whose teammate took to his heels, running away hurriedly by taking off his T-shirt bearing the identifier “coast-guard” for fear of being shot at by the attacker, according to some sources.
The terrorist is not a “lone wolf”
It is now established that it is “al-Furqan Brigade” that was behind the attack on the Imperial Hotel, which pulverizes the version that the attacker is a lone wolf, who had arrived on the morning of the attack from Siliana to Sousse coming on board of a car.
It is clear from the investigation that he had found shelter for five whole days and nights in a house located in Chott Meriam without the National Guard, which has territorial jurisdiction, noticed it.
He was staying with a group of extremists who offered him shelter and food before leaving the scene at “around 11:20, on the day of the attack, aboard a car that dropped him at a track leading to the beach before returning home, while the terrorist walked the distance of 300 meters on the beach and moved to action.
According to informed sources, after the dismantling of the al-Furqan Brigade, the investigators found in that house a quantity of weapons, explosives and ammunition buried in the garden of the house, confirming that the weapon used by the bomber came from the arsenal seized in the house.
Share
Facebook
Twitter
Linkedin
Email
WhatsApp
Viber
Pinterest
ReddIt
Tumblr
Telegram
Digg
Mix
Print
Previous articleTunisia: Linagora to open offices, create 50 jobs
Next articleTunisia, Oman sign MoU in handicrafts