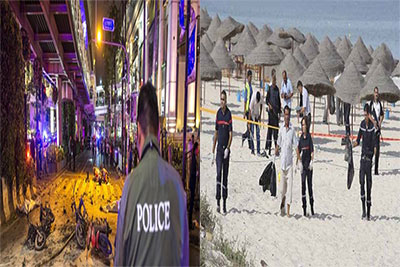 Sousse almost two months ago and Bangkok a few days ago saw their tourism hit hard by deadly and devastating attacks. Forty killed here, twenty there. The aim of the terrorists is the same: to strike the hardest blow to a flourishing tourism, albeit to varying degrees, but which represents an essential boon to the economy.

While in Tunisia as in Thailand, action is ongoing to heal the wounds and work to bring back tourists by assuring them that everything will be done so that these tragedies be the latest and ultimate, world tourism experts show serenity and optimism that is surprising at first sight but regularly supported by chronic tragedies that hit the tourism in the world.

The biggest Canadian television network “CBC News,” issued a survey that brings a lot of ammunition to this trend. It noted that “given the way international travelers responded to the history of episodic violence and attacks against tourists in other hot spots of international travel, the travel industry in Thailand will recover.”

“Once the initial shock of this tragic incident is amortized, which is always the case, the tourists will come back,” said Stephen Smith, University of Guelph professor specializing in research on tourism. “Normally, tourism is resilient enough”, he assured. He cites as evidence the attack that targeted the Indonesian resort island of Bali in 2002. The incident made international headlines after 202 people, mostly foreign tourists, were killed. It took about a year for the country’s tourism industry to come back, recalled Smith.

The case of Sousse

A more speedy recovery is taking place in the Tunisian resort of Sousse, where a gunman opened fire at a local hotel in June, killing scores of tourists, reports CBC News, adding that “two months later, the beaches are as full as they were before, “said Heather Craig-Peddie, Vice President of the Association of Canadian Travel Agencies (ACTA), a national trade group representing retail travel agencies and suppliers.

She referred to what it called “a short-term blip”, adding that the duration of this “blip” will depend on how the Thai government will respond to the attack and what the investigation yields, as indeed emphasized by the community of international tourism experts.

“I don’t think violence alone will deter tourism,” said Craig Johnson, a University of Guelph political science professor whose PhD research on ethnic conflict and environmental degradation sent him to Thailand. “The big factor is how the government responds.”

In the same vein, a report published by Deloitte on travel and tourism, says that “the trauma of such attacks probably remains anchored, but the tourism industry and customers seem to have become more resilient. According to the 2015 report of Deloitte competitiveness for the World Economic Forum, the rate at which the hotel industry recovers after political unrest or violent event has “decreased significantly” in the last fifteen years.”

The report said the fill rate of New York hotels took thirty-four months to recover from September 11. In comparison, it took twelve months to Madrid hotels to find the same rate after the 2004 attacks, and nine months to London hotels after those of July 2005. As for the attack in Boston and the murder of Lee Rigby in London, they had a limited impact, the report said.

The report says that there has been a change of mentality with “the emergence of a culture of” business as usual “in response to terrorism.” The World Tourism Organization had already identified this phenomenon after the 2005 bombings in Egypt in which 88 people were killed. It then noted that changes in tourist activities were minimal and that civil society is now aware of the global nature of these threats [terrorists] and chose not to give in to it. ”