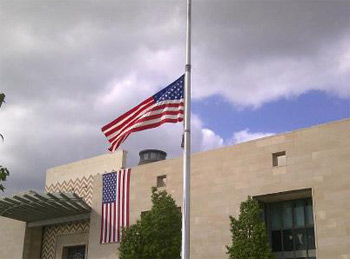 The notion of the American Dream covers several meanings including the protection of the sovereignty of the United States of America, the most powerful country in the world.

The idealism inspired by this concept requires actions to materialize, and as stated by Herbert Hoover, former president of the US, “Words without actions are the assassins of idealism.”

The day after the verdict by the Appellate Court of Tunis, sentencing the perpetrators of the attack on the US embassy and the American school to 2 years in prison, the US said it was disappointed with the sentence imposed.

At a press briefing Wednesday, the US State Department said the case has been delayed so long and “remains incomplete with several key suspects still at large.”

The US State Department hopes that all those responsible for the attack on the US Embassy in Tunis and the American Cooperative School will be brought to justice without further delay.

This American anger in the form of a diplomatic discontent was preceded by several signals warning Tunisia against any lenient approach to the “encroachment upon US sovereignty.”

On September 23, 2012, a few days after the attack and the famous appearance of Interior Minister Ali Larayedh justifying what happened by “we expected them from behind, they came from the front,” Rafik Abdessalem, then Minister of Foreign Affairs, was “scolded” at the summit of foreign ministers of United Nations member countries (UN) and received threats of suspension of US aid if his government headed Hamadi Jebali does not arrest sponsors of the attack.

Two days later, and for the first time in the history of the Tunisian-American relations, the newly appointed ambassador of the United States Jacob Walles visited the headquarters of the Department of Justice and handed to Noureddine Bhiri, photos of the sponsors of the attack as well as secret documents related to the storming of the American school.

The US did not allow some concessions due to a lack of political will on the part of the government of Tunisian Muslim brothers to capture the perpetrators of the attack on the premises of the US diplomatic mission in Tunis.

Six days after the Walles-Bhiri meeting, Elizabeth Jones, Assistant Secretary of State for Foreign Affairs, visited Tunisia on the personal orders of Barack Obama, to meet with Hamadi Jebali, the Interim Prime Minister and she conveyed to him the anger of the US which accused the Tunisian government of not making enough effort to punish the terrorists who attacked the symbols of American sovereignty on its own territory.

These denunciations are tolerable in diplomacy and serve to convey a political message while remaining within the limit of the sovereignty of countries. But the statement that was considered synonymous with virulent intervention was made on May 30, 2013, following the verdict by the court of first instance of Tunis, where the US State Department strongly condemned the sentence considering it disappointing and not reflecting the seriousness of what happened.

Immediately after the official statement of the Americans, the Public Prosecutor lodged an appeal before the Appellate Court of Tunis. The verdict was pronounced on February 18, 2015, establishing the guilt of the defendants who were sentenced to longer prison sentences. However, the State Department is not happy, expressing disappointment at an incomplete trial that has been delayed so long.

For three years, the US has said repeatedly that the real instigators of the attack on the US embassy and the American school have not been arrested despite the disclosure of their identities by the US secret services. For them, it is obviously a case that will be further monitored.