HomeFeatured NewsTunisia: would the Mediterranean Gate be out of boxes? Sama Dubai reaffirms...
Featured News

Tunisia: would the Mediterranean Gate be out of boxes? Sama Dubai reaffirms its commitments in Tunisia 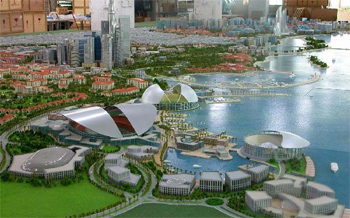 Sama Dubai has faith in the Tunisian market. It is the subsidiary of Dubai Holding, leader in the MENA region in developing projects that has just reaffirmed it, restoring hope and probably life to its mega project in Tunisia “Mediterranean Gate” that has been in the box for years.

A press release issued Thursday says that the “Sama Dubai group remains fully committed to its investments in Tunisia,” emphasizing “the importance of the “Mediterranean Gate” project in reviving the tourism sector and attracting foreign investments, besides creating many employment opportunities for Tunisians. ”

Sama Dubai, however, said a project of this magnitude requires a revision of the financial plans as much as a thorough examination of the situation prior to the start of its implementation.

The Group responded, in this release, to the statements of the Tunisian Secretary of State Anis Ghedira who had indicated on April 27 that negotiations are conducted with Sama Dubai to bring it to meet its commitments and to continue the development and construction works.

Otherwise, he cautioned, “we will explore other avenues, including the sale of the project to the Tunisian state,” without omitting to underline that already, “other private investors have expressed interest in investing in this project.”

“It is unacceptable not to benefit of this land heritage of Tunisia, whose value has increased from 15 billion dinars in 2008 to 25 billion dinars currently (at current prices),” he told reporters.

CEO of the “Société d’Etudes et de Promotion de Tunis Sud (SEPTS)” (company for studies and promotion of Tunis south) Moncef Sliti said once completed, the project “Mediterranean Gate” will ensure an expansion of the capital and further liven it up, especially with the creation of a marina with a capacity of 1,300 to 1,500 boats, knowing that the project will generate 150 to 200 thousand new jobs and provide for the development of new residential areas with a capacity of about 200 thousand inhabitants.

Obviously, the warning shot of the Tunisian Secretary of State has not been a damp squib, and it is appropriate to ask why the Tunisian authorities have long left things as they were, at worst, to languish in a state of expectation that is difficult to understand the reasons while a similar project could upset the housing situation in the capital and provide jobs to tens of thousands of Tunisians, mostly among university graduates.

This is true, especially as the “Mediterranean Gate” is not a classic but a mega integrated real estate project that has several economic (services) and tourist (health, business and congress tourism) components and its mission will be to help Tunisia come closer to the level of development achieved by member countries of the Organisation for Economic Cooperation and Development (OECD).

The start of construction was planned for late 2008 and works should have spread over a period of 10-15 years.

Among the components of the project, there are commercial areas of a new type of shopping malls, a center dedicated to information technology, cultural spaces and sports and medical facilities and community centers.

In addition, the “Mediterranean Gate” will build the first congress in Tunisia with the objective of developing congress tourism (meetings, conferences and events).

Above all, the “Mediterranean Gate” should open new opportunities for the job market and create vocational and technology transfer niches by attracting new service sectors in Tunisia.

The project will therefore serve as a hub for service and information technology companies that will come in search of its skilled and trained workforce. It will, moreover, allow the arrival of new businesses in Tunisia. Besides, priority should be given, in particular, to Tunisian labor and skills.

The West Africa Region Consults on the Common African Position On...

Tunisia: three donations of over  2 million from France