HomeInterviewWalid Belhaj Amor:the national bond will be a mere drop in the...
Interview

Walid Belhaj Amor:the national bond will be a mere drop in the budget deficit, non-strategic public companies must be sold 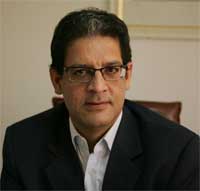 Walid Belhadj Amor, President of the Tunisian Center for Monitoring and Business Intelligence (CTVIE) and Deputy Director General of Comete Engineering granted an exclusive interview to Africanmanager, addressing the competitiveness of the national economy, Tunisia’s debt and the austerity policy proposed by the country.

Walid Belhadj Amor said in this regard that there is no other possibility than reviving investment. Austerity is just the opposite of investment, so it can not produce effective stimulus.

You said that Tunisia has forgotten to work, can you further clarify this observation?

The competitiveness of the Tunisian economy has continued to deteriorate over the last 3 years. The strikes, incessant claims, disruption of the production system have largely affected the productivity of the entire apparatus in both the private and the public sector.

This situation can not continue and it is urgent to restore production to recover production levels consistent with the objectives of growth and recovery.

There are large niches of competitiveness and productivity in the Tunisian economy, which can help to create more value and wealth.

The State shall implement a policy to simplify administrative procedures for businesses, restructure entire sections of the public economy such as the sectors of transport and logistics, the mining and hydrocarbons or the financial sector.

At the same time, it must fight against the informal sector and smuggling to restore normal market conditions. Energy needs to be liberated in a country whose economy is heavily ossified.

Is the debt situation in Tunisia really bearable today, as some believe?

The level of debt is still generally tolerable, but at the rate it is increasing, it will not stay long.

Debt is bearable only if it can create enough wealth to ensure repayment. If this is not the case, then the debt will ultimately weigh on public finances.

Over the past two years, debt in Tunisia essentially constituted budget support to finance the operating costs of the state, and the consequence is that the current levels of debt service are now high. It would be wise to consider the possibility of a debt recycling, at least in the form of bilateral investment in economically viable projects.

Some think that even with austerity, Tunisia should not expect much, why according to you?

Economic recovery can only come from consumption or investment. In Tunisia, given the structure of our economy and our productive apparatus, the pick-up in consumption would essentially benefit imported goods and directly affect the trade balance.

There is therefore no alternative to recovery through investment. Austerity is just the opposite of investment, so it can not produce effective recovery.

However, in view of the budgetary imbalances there is no alternative but to reduce our expenses, but we must reduce operating costs and maximize those of investments. This is where the productivity factor comes into play, insofar as the Tunisian economy can absorb more investment if the production system is restarted efficiently.

Do you think that the national bond issued by the Government of Mehdi JOMAA will really solve the crisis of Tunisia?

The crisis can not be addressed by a single measure whatsoever. A loan of 500 million TD will be a drop in the budget deficit, but it will help to absorb part of it.

The state needs to fund the budget, but it also needs to finance the economic recovery; and to do this, there are solutions including the sale of public companies and non-strategic assets such as those confiscated after the revolution, the assets held by public banks and loss-making SOEs that put a strain on the state budget.

We need to ask ourselves whether the role of the state and public banks is to hold frozen assets in such sectors as construction, real estate development and trade. I do not think so.

The role of the government is not to intervene in the productive but not strategic sector to set up mechanisms that promote the development of the productive sector by avoiding situations of unearned incomes and ensuring a fair distribution of wealth.

Jalloul Ayed, the former Finance Minister said Jomaa’s government is in the footsteps of its predecessors, do you share this observation?

I do not know in what context Mr. Ayed said this or about what precisely. Jomaa’s government came from a political consensus and not elections. One would expect it to have a free hand to implement its policy. This sounds more difficult than expected and the support shown by the political class is actually less frank than what is necessary.

He decided to opt for a consensus on economic and social plan, which presents some risks: an impasse in the debate, first, and minimum agreement, then. But it is too early to tell, waiting to see the results. In politics, often the end justifies the means.

However, the government will bear the consequences of the failure of this dialogue, as Tunisians await the implementation of solutions. Tunisians, including specific categories have suffered. They can maybe wait a little longer, but they need hope, first, and effective responses, then. They need to feel that there is a captain at the helm and he knows the way.