HomeInterviewChokri Yaich to AfricanManager: ''I do not believe that the appointment of...
Interview

Chokri Yaich to AfricanManager: ”I do not believe that the appointment of Laârayedh is a wise decision” 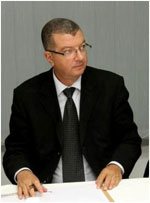 The country’s political situation, the reasons for rejection of Hamadi Jebali’s decision to form a government of technocrats, the government of Laârayedh and political priorities are at the center of the interview given to us by Chokri Yaïch, member of the National Constituent Assembly (NCA) and Executive Committee member of Nidaa Tounes.

In this interview, he noted that the appointment of Ali Laârayedh is not wise because he has shown his limits to ensure the safety of his people.

He also stated that the country is going through a serious political and social crisis, aggravated by the cowardly assassination of Martyr Chokri Belaid.

Chokri Yaich also accused Ennahdha of seeking to serve its own interests and achieve, therefore, goals that are specific to the party, or even capture definitely all the workings of the state.

What do you think of the political situation in the country?

Political life is almost paralyzed. Tunisia has been living for several months in the unknown. The country is going through a serious political and social crisis, which the cowardly assassination of martyr Chokri Belaid, gave a dramatic dimension. But recent changes observed with respect to the formation of a new Government showed Tunisians the limits and the inability of the Ennahdha Party and its ally, the CPR, to lead the country and revealed their true intentions to hang to power even when the country is on the brink of chaos and is plunging in a serious politico-economic and social situation. The outgoing Prime Minister had himself confirmed it by “minimizing the case” and simply saying that his Government had failed but omitted to say that it was his own party behind this failure.

Why, according to you, members of Ennahdha strongly rejected the decision of Hamadi Jebali to form a government of technocrats?

This was expected, because members of Ennahdha are listening to their “leader” based “Montplaisir” (seat of Ennahdha). Apart from a small minority, who supported Hamadi Jebali in his initiative, all others rejected it. If we return to the statement of Hamadi Jebali and his main condition to “serve the people” to form a new government, the rejection of Ennahdha is explained by the fact that the party does not want this condition and wants only to serve its own interests, or those of some of the Tunisians to achieve very specific goals to it, among other things, definitely taking hold of the whole machinery of the State, in a first step and establishing a theocratic-leaning republic disguised as a democracy. Otherwise, how to explain the ferocity of their members to enshrine in the new constitution passages referring to the Sharia.

How also explain their rejection of the universal nature of human rights and freedom of conscience?

Moreover, while all Tunisians are glued to their televisions watching endless debates dealing with the government crisis, the Nahdhaouis continue to occupy key positions in the administration, hire and distribute donations, medicines and others to people loyal to them in all regions of the country (as it is the case this week in a mosque in Ain Draham), and the most serious is the emergence of a new kind of training and “brain formatting” in private schools and even in kindergartens.

Is the appointment of Ali Laârayedh, as prime minister really the right choice?

Names does not matter, what is more important is to concretize the wishes of a whole nation to establish security, peace and justice, then comes the purchasing power of Tunisians who have never seen a situation as catastrophic. But personally, I do not think this appointment is wise because this man has shown his limits to ensure the safety of his people and will always listen to those who describe “leagues for protection of the revolution” as the “conscience of the nation” while on the ground, these small groups represent the main source of terror.

Why did not they re-appoint Hamadi Jebali although they promised to do when he resigned?

The answer is simple, firstly: Jebali has shown his inability to lead “the largest government in history!” secondly: they do not want him because he had indeed dug a hole in their own party, and thirdly: they do not want to hear about his conditions, including expanding the government to all components without exception and the organization of a national conference for a national consensus covering all thorny issues, and this is understood from his phrase “serving my people”…

Can the government of Ali Laârayedh easily win the confidence of the ANC?

I think the ANC will not reject this appointment, because a large majority could vote for confidence, Ennahdha, CPR and Ettakatol groups and perhaps other groups…

How do you see the current political agenda?

The priorities need to be materialized on the ground to restore the confidence of Tunisians in their rulers, starting with revealing the murderers of Chokri Belaid and those behind this crime, the dissolution of all factions and parallel security groups including those which the “Ennahdha -CPR-Wafa” call leagues for protection of the revolution then the organization of a National Consensus Conference involving all political and civil forces in the country and dealing with all constitutional, political, social and economic issues.

What is the impact of political conflict on the national economy?

If the departments of sovereignty, Interior, Justice, Foreign Affairs and Defense (and if we add to them the Ministry of Religious Affairs) are not under the control of true independents, the situation will worsen, especially since the “political choices” disclosed during the review of 2013 Finance Act 2013, sail in the opposite direction of economic realities. These choices have favored consumption at the expense of investment and huge fiscal pressures, ignoring the real issues faced by Tunisian companies.