HomeInterviewChokri Yaich to Africanmanager: preliminary draft of Constitution paves the way for...
Interview

Chokri Yaich to Africanmanager: preliminary draft of Constitution paves the way for a theocratic state 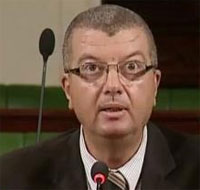 The preliminary draft of the Constitution, its advantages and shortcomings, as well as the security situation in Tunisia, especially after the events of Mount Chaambi were the focus of the interview given to Africanmanager by Chokri Yaich, National Constituent Assembly elected member of Nidaa Tounes.

You have certainly read the preliminary draft of the Constitution, how do you assess it? What are its weaknesses?

The main weaknesses are the lack of consistency, the contradictions between articles and confusion within the same article. This could leave the lawmaker bewildered when making laws that are based on the constitution. The most striking example is the clear contradiction between Articles 1-2 where Islam is considered as the religion of the community (Article 1), civil state (Article 2) and section 136 where it is mentioned that it is forbidden to touch Islam as the religion of the state.

Why this ambiguity, according to you?

This ambiguity is intended to pave the way for the implementation of the Sharia in a text that does not mention it. The Sharia is substituted by the immutable principles of Islam “thawâbit el Islam.” The latter, in the preamble and in a same sentence, overwrite upstream universal human rights, which in turn, are controlled downstream, by the notion of cultural specificities of the Tunisian people.

Confusion contained in the same sentence can be only voluntary. It is a tactic of Islamists to confuse and destroy the universal framework of human rights, one of the key factors of a constitution that promotes the civil state.

Furthermore, the refusal to enshrine the freedom of conscience in the draft constitution reinforces the hidden idea of the phased implementation of commandments of the Sharia, such as the condemnation of the apostate to death. Therefore, this is a step in the direction of the theocratic state. Curiously, these days everyone is mobilized to discuss the issue of the type of political regime. In my opinion, this is another tactic of Islamists to forget the most important and essential: the confusion and contradictions that affect the rights and freedoms in this draft.

The Ennahdha party has always set the limit high enough and then lower it by making concessions as it will probably do to get closer to the mixed political regime. The contradictions in this project are probably intentional, to gradually adopt a constitution that causes confusion, weakening the civilian government and opening the way for a theocratic state if the Islamists remain in power for a long time.

Does this Constitution have strengths?

The strength of this Constitution rests in the chapter dedicated to local government, where the local administrative organization will be based on the principles of decentralization. This will be achieved by local authorities, regions and provinces covering the entire territory and providing them with financial and administrative autonomy. All control is now made afterwards to facilitate subsequent spending and implementation of development projects.

Do you see a solution to this situation?

The country is going through a critical period in its history. The frustration of the population has reached an intolerable level. This phase of our history is characterized by internal and external challenges (invading obscurantist Wahhabi preachers, violence, terrorism, export of “Jihadists”) and a confusing constitution far from consensual.

The only solution lies in the resumption of the national dialogue initiated by the UGTT and the participation of all segments of the civil and political scene to discuss and resolve all problems including those of the Constitution.

How do you assess the security situation in Tunisia, particularly with what is happening in Mount Chaambi?

The terrorist operations that occurred in Mount Chaambi, Kasserine represent a dangerous threat to the security of the country.

This situation is the result of the indifference of the government in the face of movements that feed hatred and division and practice violence. How can a state remain stable when it allows obscurantist Wahhabis to use our facilities and attract confused and helpless young people. This same state remains indifferent to the “export” of hundreds of young men and women for Jihad in Syria and elsewhere. So, we should not be surprised to see one day, hundreds of our compatriots returning from Mali or Syria and practice Jihad in Tunisia against their own people, especially as there are many weapons in our country.

What are the effects of this on Tunisia?

The proliferation of weapon seizures and the discovery of weapons caches, since the beginning of the year is a sign that we are facing a very serious situation. If this is not controlled in time, we may fall in the Algerian scenario of the 90s.