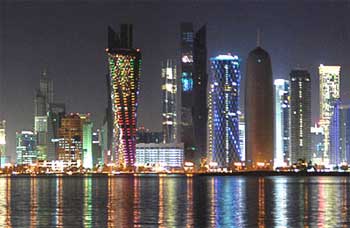 The property market in Doha has grown substantially quarter-on-quarter, registering a 29 per cent increase in the number of transactions for the period with the aggregate value of sales reflecting a 35 per cent increase, said a report.

The property market in Doha has grown substantially quarter-on-quarter, with a 29 per cent increase in the number of transactions between the fourth quarter of 2013 and the first quarter this year, with the aggregate value of sales reflecting a 35 per cent increase, said a report.

The land sales continue to dominate movement in Doha’s real estate sector, representing approximately 77 per cent of all property transactions in the last three months, according to the latest ‘Asteco Qatar Q1 2014’ report, with the total value topping QR7.35 billion ($2.01 billion).

Qatar’s capital has also seen strong overall performance in the residential rental market despite a second wave of apartment releases on The Pearl-Qatar easing the pressure on rental rates slightly following stabilisation in the fourth quarter of 2013, said the property expert in its report.

“This is the second consecutive quarter in which we have seen existing apartment stock augmented and there is a definite rebalancing of prices for this hugely popular location, despite evidence of increases in other areas of the city such as Al Sadd and Bin Mahmoud,” remarked Jan Crisp, the general manager for Asteco Qatar.

“Take-up of one and three-bedroom units on The Peal-Qatar remains strong, and is being driven by demand from people looking for more affordable accommodation with couples downgrading to smaller unitsand families opting for three-bedroom apartments instead of increasingly expensive villa rental prices,” said Crisp.

The hotel and serviced apartment sector also continued to perform strongly with increased demand for one-bedroom units, which has fuelled the development of new projects, she added.

According to Asteco, the pressure eases on rental rates for The Pearl-Qatar as new stock hits market while tenants across city reconsider location as rents rise elsewhere.

A one-bedroom apartment located on The Pearl-Qatar currently rents for up to QR12,000 per month, the same as the third quarter of 2013, down two per cent over the fourth quarter, with three-bedroom units renting for QR19,000 per month; but still showing a blanket six per cent year-on-year increase.

The report also notes increased rental rates in other areas such as compounds located close in neighbourhoods close to amenities and schools maintaining their desirability as supply failed to match demand, forcing up rental rates. Lease renewals for four and five-bedroom villas were also up by 2-4 per cent on the previous quarter, it added.

After a decrease in the overall value of property transactions in the fourth quarter, the first three months of the year saw improvement in residential sales activity as aggregate vales increased by 19 per cent quarter-on-quarter, although Asteco reports that due to the release of new stock on The Pearl-Qatar, values for this area levelled off.

“Towers with above-market-value prices are losing out in terms of sales transaction volume as price-conscious buyers take a more measure approach to investment. We have also seen a significant increase in mortgage enquiries recently, according to local bank reports,” said Crisp.

New apartments in Viva Bahriya continued to lead the equivalent units in Porto Arabia at QR17,800 versus QR16,000 per sq m for direct sales and QR16,700 versus QR12,500 for resales, with prices overall up between 5 per cent and 10 per cent quarter-on-quarter.

Leasing activity in the office market was limited in the first quarter with rental rates remaining flat after a busy Q4 2013. The majority of interest came from smaller businesses with just a handful of new lettings agreed for more than 1,000-sq m, and including relocations by companies seeking better quality office space.

Demand for 200-500-sq m facilities is primarily directed towards secondary locations, as private sector companies shy away from the QR185 per square metre-plus rates in premium destinations like West Bay.

Asteco pointed out that vacancy levels in secondary locations remained high as much of the accommodation available was below the standard required by corporate tenants.

“The retail sector also merits a mention with the recent opening of both the Ezdan and Westgate Malls, and the imminent debut of The Pearl-Qatar’s Medina Centre proving highly attractive to retailers keen to expand their local operations, with reports of positive pre-letting figures,” remarked Crisp.

“There are concerns of future oversupply, however, with organised retail floor space forecast to grow by more than 1.2 million sq m by 2017,” she added.